Ricardo Maduro Joest was born on 20 April 1946 in Panama, of a Panamanian father and Honduran mother. Although his mother was born in Guatemala, she was considered by blood relation to be Honduran, although she did not obtain Honduran nationality until 1980. Thus, questions have been raised as to the legitimacy of Maduro's nationality and his eligibility for election as president. In the 2000 opposition National Party presidential primary elections, Maduro was prohibited by the National Election Tribunal from running because of these questions regarding his nationality. Maduro temporarily withdrew his candidacy and appointed Luis Cosenza to run as his representative, which allowed him time to legalize his situation before the November 2001 elections. In the 2000 primary, Cosenza won 83% of the vote, although voters were actually casting their ballots for Maduro. In the election, Maduro was permitted to vote but not to run as a candidate.

Maduro went to elementary school in Tegucigalpa and high school in Pennsylvania, before graduating from Stanford University with a degree in economics. He comes from two families of businessmen: the Midence family of Honduras, founders of the Bank of Honduras, and printers and distributors of Honduran currency before the Honduran Central Bank was established; and the Maduro family of Panama, also well-respected business people. Maduro served as general 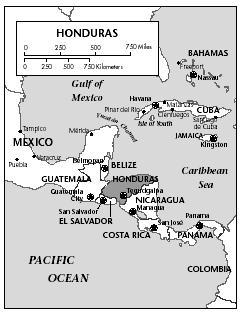 manager of Xerox in Honduras, before taking a job as executive director of Inversiones La Paz in 1976. He founded and organized many different companies while serving in this position, from agriculture to hotels. He won the 1983 Honduran American Chamber of Commerce "Businessman of the Year" award, one of many for his business achievements. He has been seen as a political newcomer, who promises a crackdown on crime in the style of former New York City mayor Rudolph Giuliani.

Before he divorced, Maduro was married to Miriam Andreu, with whom he had four children—Ricardo, Carolina, Cecilia, and Lorena. Maduro's son Ricardo was killed in a kidnapping attempt in 1997, which devastated Maduro and led to his zero-tolerance campaign against crime. On 10 October 2002, Maduro married Spaniard Aguas Ocaña Navarro, head of the Spanish Consulate in Naples, Italy.

this isnt very helpful.
please put more info
there is nothing about its nationalty
sprts
geography
religon
the goverment
and also history.
thanks for nothing.