Modern Ethiopia dates its political origin to 1896, when Emperor Menilik defeated the Italians at the famous battle of Adewa. Upon the death of Menilik, his cousin, Ras Tafari Markonnen, became the regent of Menilik's daughter. In 1930, Ras Tafari proclaimed himself Emperor Haile Selassie of Ethiopia. In 1974, Haile Selassie was deposed by a coup of leftist soldiers led by Mengistu Haile Mariam.

Under the Constitution of 1987, Ethiopia became a socialist country based on Marxist-Leninist principles. The supreme power belonged to the president, Mengistu, who was also commander in chief of the armed forces and president of the Council of Ministers. The People's Democratic Republic of Ethiopia, as it was then called, became a one-party state, ruled by the Workers' Party of Ethiopia. Mengistu was responsible for the brutal deaths of thousands of people. His reign lasted from 1974 to 1991, and it was marked by the massive execution of intellectuals who were perceived to be enemies of the regime. Mengistu was widely regarded as a ruthless killer. According to the New York Times of 22 May 1991, "Even by the bloody standards of African power-grabbing during the era of Idi Amin of Uganda and Emperor Bokossa I of the Central African Republic, Colonel Mengistu was considered notorious." The opposition to Mengistu was led by Eritreans, organized under the banner of the Eritrean People's Liberation Front (EPLF) and the leadership of the Tigray People's Liberation Front (TPLF).

Mengistu was also responsible for the destruction of traditional methods of agriculture and the introduction of Marxist-Leninist ideas of joint ownership of the tools of production and state ownership of all land. The famine that struck much of Africa in 1984 and 1985 created a food crisis in Ethiopia that the Mengistu regime could not resolve. This combination of famine and the loss of military support from the Union of Soviet Socialist Republics proved too much for Mengistu to survive. In May 1991, when three factions of rebel forces converged on Addis Ababa, Mengistu fled the capital to Zimbabwe. One week later the rebel forces entered the capital and the demise of the Mengistu regime was complete.

In a week-long conference convened 1–5 July 1991 in Addis Ababa, the new transitional government agreed to draft a constitution within two years. Political representation was distributed in proportion to the population of the nationalities. For example, the Ethiopian People's Revolutionary Democratic Front (EPRDF), a coalition of four parties, received 32 seats, and the Oromo Liberation Front, 12 seats. The rest of the groups received from one to three seats each. The Council of Representatives elected the transitional president, Meles Zenawi, who would appoint the prime minister. The Council of Representatives, with 87 members, exercised legislative functions and oversaw a Council of Ministers. The Council of Representatives was composed of 27 ethnic and political groups. It was decided that Eritrea should be given its independence through a national referendum held in mid-1993. In exchange, the Eritreans promised the EPRDF that Assab, an important port on the Red Sea in the north that accommodates 70% of the country's trade, would be accessible to Ethiopians. Without Assab, Ethiopia would be landlocked.

In May and June 1995, Ethiopia's first multiparty elections were held across the country, and the members of the new Council of People's Representatives (Parliament) were selected. On 22 August 1995, the newly elected Parliament was sworn in for a five-year term, bringing to an end the transitional government that followed the overthrow of Mengistu Haile Mariam. During a four-day session, the Council of People's Representatives selected a new president, 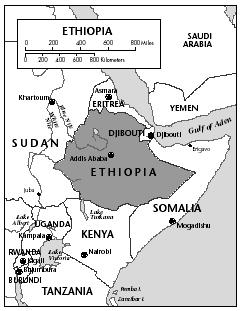 Negasso Gedda, an Oromo official of the Oromo Democratic Coalition; swore in the prime minister, Meles Zenawi; and adopted the new constitution.

A democratic federal state structure was established, comprising nine states that are delineated on the basis of the settlement patterns, identity, language, and consent of the people concerned. The newly named Federal Democratic Republic of Ethiopia has two houses: the Council of the People's Representatives (547 seats), which is the highest authority of the federal government; and the Council of Federation (155 seats), which has the power to interpret the Constitution. The position of the head of state is purely honorary, while executive power is held by the prime minister. It is the prime minister, elected from among the members of the Council of People's Representatives, who names the government ministers, members of the Central High Court, and the auditor general. He also monitors the execution of laws and decisions, presides over the Council of Ministers, controls the armed forces, and sets Ethiopia's foreign policy.

Why is it that 3/4 of Africa countries are not well orgained in term of political engeneering?