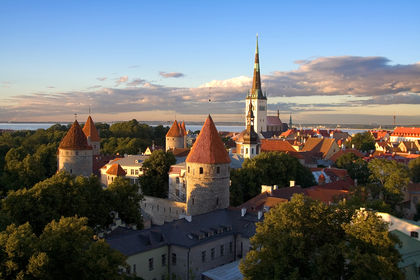 "For Estonia the equal treatment of all states and nations is significant. Europe should treasure its diversity—a source of its co-operation and ideas."

The Republic of Estonia lies on the shores of the Baltic Sea and the Gulfs of Riga and Finland, and borders Latvia and Russia. The total land area of Estonia is 45,226 sq km (17,462 sq mi). Estonia's population was estimated at 1.4 million in 2002. Estonians account for 65% of the republic's population, while Russians make up 28%. Ukrainians, Belarusians, and Finns account for most of the remainder. The official language is Estonian, which is a member of the Finno-Ugric family of languages, more similar to Finnish and Hungarian than Russian or English. No reliable recent figures regarding religious affiliation are available, but Estonians tend to be Lutherans while Russians tend to be Russian Orthodox.

The official currency is the kroon. Estonia's per capita gross domestic product (GDP) was estimated at US $10,000 in 2001. Estonia produces excavators, electrical engines, cotton cloth, and furniture. It is a net exporter of agricultural products. Leading exports are machinery and equipment, wood products, textiles, food products, metals, and chemical products. Top imports include machinery, light industrial goods, chemicals, and food. Estonia is the world's second-largest producer of shale oil.

Office of the President
Lossi plats 1A
Tallinn 200100
stonia