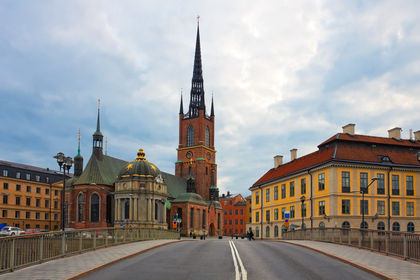 For hundreds of years, the Church of Sweden, an Evangelical Lutheran church, represented the religion of state. However, in 2000, the Church and government placed into effect a formal separation of church and state, with a stipulation that the Church of Sweden will continue to receive a certain degree of state support. According to recent estimates, about 84% of the population belong to the Church of Sweden. Roman Catholics constitute about 0.02% of the populace, with about 150,000 members. About 100,000 people are members of Christian Orthodox churches, including Greek, Serbian, Syrian, Romanian, and Macedonian. The number of Muslims is at about 350,000, with about 100,000 active practitioners primarily of the Sunni and Shi'a branches. There are also about 20,000 Jews (Orthodox, Conservative, and Reform), with about half being active. Buddhists and Hindus number around 3,000 to 4,000 each. It is estimated that about 15% to 20% of the adult population are atheists.

Thanks this helped me for my report on Sweden. I love it.
2
arika

Thank you i love it for my "Sweden" Report!!
4
aaron

this website helped me a lot with this booklet folder i had to do!thanks!
5
Evelyn

This really helped me for my sweden project, thanks
6
Shhmaimee

Heey,
Thanks! This website helped me alot. I had trouble finding websites.
I have to get this info for German class. The assignment is on Sweden! :)
8
crystal

i love this site it tells you so many things in this website and a lot when you need some infomations!!!
9
Brittany

This was very helpful for the S.S. project I had to do on Sweden.
12
Bobbiania

i honestly think that you should put a lot more information on this page Sweden .
15
Daniel Horta

I Think this was a great way to find information on the religon of sweden it was enopught to help me on my project and i might have just wanted to learn a little on sweden so thank you very much. P.S: Add more information you forgot to add parts about lutherians. P.S.S: IM 12 and i have an f in this grade and i wrote more then a 21 year old ha!
16
jihad

this helped me on my final project thanks alot! this really helped
18
rubelyn

thanks a lot...for the information... very helpful in my project..
19
rheagan

thanks this helped so so so much with my project!(:
20
June

this helped a lot thanks my project on my Sweden report is hard and you helped me in a corner of it.
21
gare

It would be of benefit if statistical data were dated so that trends could be noted, etc. As a small example, the statement "According to recent estimates, about 84% of the population belong to the Church of Sweden" would be more appropriate with a date versus the word "recent" as "recent" becomes no longer relative as time moves forward.
22
christian

Thank you so much, you helped me with my project a lot.
23
fenny

Thanks for the info it really helped me with my assignment about Sweden!!!
24
DEJ

Thank you for this evidence-based review of religion and its history in Sweden. It helped me understand why both sets of my grandparents, whose parents came from Sweden, were Lutherans!
25
darkboy

thanks. helped a bunch
this is something that can help with my reports.
26
Awesomeness

Thanks, helped a LOT!!
Will remember this site for next time! :)
27
shaniqua

Thank goodness I found this site I,m doing a Social Studies report on Sweden and this helped me out alot Thank you so much!
29
madison

thanks this so helped my project for sixth grade! next time i will go here for help first.
31
Person

This helped so much with my Sweden report. It was a good source to help me on the project.You helped me pass
34
SOMEONE

I haven't used this for my report yet, but hopefully it will be helpful!
35
amy

this healped so much onmy project thank you so much