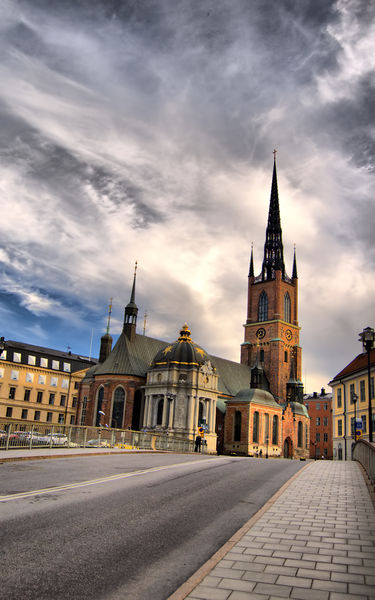 Sweden and the Swedes are first referred to in written records by the Roman historian Tacitus, who, in his Germania ( AD 98), mentions the Suiones, a people "mighty in ships and arms." These people, also referred to as Svear, conquered their southern neighbors, the Gotar, merged with them, and extended their dominion over most of what is now central and southern Sweden. In the 9th and 10th centuries when Vikings from the Norwegian homeland traveled west to Iceland, Greenland and farther afield to Newfoundland, Vikings from eastern Sweden raided areas southeastward across Russia to Constantinople. Archeologists and historians hold that the descendants of one of their chieftains, Rurik, founded the Kievan Russian state. Some other settled regions and place-names in various parts of Europe also show Swedish influence through rune-stones found across Eastern Europe.

In the Viking era, the Swedish kingdom took shape but was not very centralized. Political power became more centralized with the advent of Christianity, which came gradually between the 9th and 11th centuries. During the 12th century, the Swedish kingdom consolidated internally and under the guise of the crusades began to expand into the Baltic, incorporating Finland, between 1150 and 1300. Among the institutions established in Sweden during the 12th and 13th centuries were Latin education, new modes and styles of architecture and literature, town life, and a more centralized monarchy with new standards in royal administration—all with significant economic, legal, and social implications.

Norway and Sweden were united in 1319 under the infant king Magnus VII, but Waldemar IV, King of Denmark, regained Skåne, the southern part of Sweden, and all the Scandinavian countries were united in the Kalmar Union under his daughter Margaret (Margrethe) in 1397. For over a century, Sweden resisted Danish rule, and the union was marked by internal tensions.

In 1523, following a war with Denmark whose notable feature was the Stortorget (Great Square) massacre in Stockholm where hundreds of Swedish nobles were executed, the Swedes elected Gustavus Vasa (Gustaf I) to the Swedish throne. A great king and the founder of modern Sweden, Gustavus made Lutheranism the state religion, established a hereditary monarchy, and organized a national army and navy. His successors incorporated Estonia and other areas in Eastern Europe. The growth of nationalism, the decline of the Hanseatic League's control of Baltic trade, and Protestantism contributed to the rise of Sweden in the following century.

Another great king and one of the world's outstanding military geniuses, Gustavus Adolphus (Gustaf II Adolf, r.1611–32), is generally regarded as the creator of the first modern army. He defeated Poland and conquered the rest of Livonia, and by winning a war with Russia acquired Ingermanland and Karelia. In the period of the Thirty Years' War (1618–48), Sweden was the foremost Protestant power on the Continent, and for the following half century the Baltic Sea became a Swedish lake. Although the king was killed at Lützen in 1632, his policies were carried on during the reign of his daughter Christina by the prime minister, Axel Oxenstierna. By terms of the Peace of Westphalia(1648) Sweden gained Pomerania and the archbishopric of Bremen, part of the Holy Roman Empire. Swedish expansionism resulted, in 1658, in the recapture of the southern Swedish provinces that Denmark had retained since the early 16th century. Renewed wars extended the Swedish frontier to the west coast while reducing Danish control over trade by taking away the eastern shore of the Öresund.

Under young Charles XII (r.1697–1718), Sweden fought the Great Northern War (1700–1721) against a coalition of Denmark, Poland, Saxony, and Russia. Sweden at first was militarily successful, but after a crushing defeat by Russian forces under Peter the Great (Peter I) in 1709 at the Battle of Poltava, the nation lost territories to Russia, Prussia, and Hannover. Thereafter Sweden was a second-rate power. Throughout the 18th century there was internal dissension between those that favored increased political liberties and constitutionally shared political power and those who favored monarchical absolutism. In 1770, a power struggle between the nobility and the commoner estates, including the clergy, burghers and farmers, ended when Gustav III carried out a bloodless coup and restored absolutism. Gustavus III (r.1771–92), a poet, playwright, and patron of the arts and sciences, and founder of the Swedish Academy, was eventually assassinated by a group of disgruntled nobles.

Sweden entered the Napoleonic Wars in 1805, allying itself with Great Britain, Austria, and Russia against France. Russia switched sides in 1807, however, and the ensuing Russo-Swedish conflict (1808–9) resulted in the loss of Finland. King Gustavus IV was then overthrown by the army, and a more democratic constitution was adopted. In 1810, one of Napoleon's marshals, a Frenchman from Pau named Jean Baptiste Jules Bernadotte, was invited to become the heir to the Swedish throne. Three years later, he brought his adopted country once again over to the side of the allies against Napoleon in the last full-scale war fought by Sweden. His reward for being on the winning side of the Napoleonic wars was to wrest a reluctant Norway from Danish control. After a show of Swedish force, Norway was forced into political union with Sweden that lasted until 1905 when the union was largely peacefully dissolved.

Bernadotte assumed the name Charles John (Carl Johan) and succeeded to the Swedish throne in 1818 as Charles XIV John. The Bernadotte dynasty, which has reigned successively since 1818, gradually relinquished virtually all of its powers, which were assumed by the Riksdag, Sweden's parliament. Sweden has become one of the most progressive countries in the world. Industry was developed, the cooperative movement began to play an important part in the economy, and the Social Democratic Labor Party gained a dominant position in political life.

Carl XVI Gustaf has been king since the death of his grandfather, Gustav VI Adolf, in 1973. In September 1976, a coalition of three non-Socialist parties won a majority in parliamentary elections, ending 44 years of almost uninterrupted Social Democratic rule that had established a modern welfare state. The country's economic situation worsened, however, and the Social Democrats were returned to power in the elections of September 1982. Prime Minister Olof Palme, leader of the Social Democratic Party since 1969, was assassinated in February 1986. In the ensuing 17 years, investigators have been unable to establish a motive for the killing or to find the assassin.

Sweden remained neutral in both world wars; during World War II, however, Sweden had a difficult time maintaining neutrality as her Nordic neighbors were drawn into the conflict. Sweden served as a haven for refugees from the Nazis, allowed the Danish resistance movement to operate on its soil, and sent volunteers to assist Finland's fight against the Russians. On the other hand, Sweden was compelled to comply with German demands to transport its troops through Sweden to and from Nazi-occupied Norway. After the war, Sweden did not join NATO, as did its Scandinavian neighbors Norway and Denmark, but it did become a member of the UN in 1946 and participated in some of the European Recovery Program benefits. In 1953, Sweden joined with Denmark, Norway, Iceland, and, later, Finland to form the Nordic Council, and was instrumental in creating EFTA in 1960. Subsequently Sweden declined an invitation to join the EEC with Denmark, Ireland, and the UK; a free-trade agreement with the EEC was signed 22 July 1972. Sweden's post-WWII foreign policy has been termed "active neutrality." Neutral Sweden tried to mediate in the Cold War confrontation between the Western and Soviet blocs and sought a major role in development assistance toward newly independent countries in the Third World.

The environment and nuclear energy were major political issues in the 1980s. In the 1990s and into the new century, the major concerns have been conflicts over immigration policies, the economy, and Sweden's relationship to the European Communities. Sweden's economic crisis led to large-scale public spending cuts by a center-right government. In 1991, Sweden applied for membership in the EC against a background of considerable opposition. In May 1993, the Riksdag altered Sweden's long-standing foreign policy of neutrality. In the future, neutrality would only be followed in time of war. The Riksdag also opened up the possibility of Sweden's participation in defense alliances, which remains a hotly debated issue in Sweden. In 1994, Swedes voted to join the EU and the country officially became a member on 1 January 1995. Sweden did not join the 11 EU countries participating in the launch of the new European currency, the euro, on 1 January 1999. Public opinion over the succeeding years softened on the issue of euro membership, however, and a referendum on joining the monetary union will take place on 14 September 2003. The ruling Social Democratic Party supports euro membership, but its coalition partners in 2003, the ex-communist Left Party and the Greens, were strongly opposed, as those parties feared Sweden would lose not only its currency, but its status as an advanced welfare state. Sweden's traditional policy of neutrality was strained in late October 1981 when a Soviet submarine ran aground inside a restricted military zone near the Swedish naval base at Karlskrona. The Swedish government protested this "flagrant violation of territorial rights" and produced reasons for believing that the submarine had been carrying nuclear weapons. Swedish naval vessels raised the damaged submarine and permitted it to return to the Soviet fleet in early November. In 1984, a Swedish military report stated that at least 10 "alien" submarines had been detected in Swedish waters.

Following the 11 September 2001 terrorist attacks on the United States, Sweden pledged support for US-led retaliation against terrorists. At the same time, Sweden has relaxed further its policy of neutrality, and some have speculated that it will eventually join NATO. Sweden since 1992 has been a member of NATO's "Partnership for Peace" program, and in 2001, some 1,000 Swedish troops were deployed to Kosovo. In February 2002, Prime Minister Göran Persson's government made the decision for Sweden to enter into military alliances and defensive pacts with other nations.

Scandinavian countries were divided over the issue of European support for a US-led war in Iraq that began in March 2003. Sweden supported the UN Security Council Resolution(1441) calling on Iraq to disarm itself of weapons of mass destruction, but it did not openly break with anti-war leaders France and Germany in the pre-war international diplomatic conflict over the use of military force to disarm Iraq. However, Sweden offered the United States its support in humanitarian efforts to rebuild Iraq in the aftermath of the war.

I am related to King Olof and I would like more infomation about him. Thank you.
2
matisha

This is an awesome website the best one yet! I am doing a project on sweden and this is the best website!!
4
Kelly

I agree, great summarized article about Sweden, I used the information for my Swedish project too. Thanks!
5
lamiaa

this is really a great website i ts really gives you a lot of info about sweden i also used it for a project.this is the best website i have seen yet like lily said!!=)
6
lamiaa

this is really a great website i ts really gives you a lot of info about sweden i also used it for a project.this is the best website i have seen yet like lily said!!=)
7
Ebba

I think this is a good site about Sweden!:)
More history about Gustav Vasa would be great though! :)