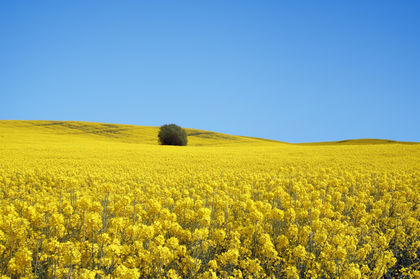 Only about 2% of Sweden's labor force earned their living in agriculture in 1999, compared with more than 50% at the beginning of the 20th century and about 20% in 1950. Production exceeds domestic consumption; however, a considerable amount of food is imported. About 6.8% of the land area of Sweden, or 2,790,000 hectares (6,894,100 acres), is classed as land cultivated with permanent or temporary crops. In 2000 there were 76,798 holdings with more than two hectares (five acres) of arable land. Farm holdings are intensively tilled; fertilizers are used heavily and mechanization is increasing. During 1980–90, the agricultural sector grew by an annual average of 1.5%. However, during 1990–2000, it remained essentially unchanged.

Most farmers are elderly, and few small farms have a successor waiting to replace the present farmer. Government policy in recent years has been to merge small unprofitable farms into larger units of 10–20 hectares (25–50 acres) of arable land with some woodland, the size estimated able to support a family in the same living standard as an industrial worker. Most Swedish farmers are small landowners who also support themselves through forestry and fishing, and in 2000, 54% of farms were less than 20 hectares (50 acres) in extent. Farmer participation in the government's set-aside program resulted in about 300,000 hectares (741,300 acres) of cropland being retired from production in 1990, and again in 1991.

In the last 50 years, Swedish agricultural policy for major commodities has developed under an official system of import levies, export support, and market intervention. This policy was in response to the economic depression of the 1930s, and for the country's need for food security in times of risk or war. The Warfare Preparedness Program, developed after World War II (1939–45), protected Swedish agriculture, resulting in high costs and overproduction. In 1991, a five-year agricultural reform program came into effect, whereby most subsidies and price regulations were eliminated, allowing consumer demand to determine production volumes. By 1995, Sweden's agricultural policy was fully in line with EU rules. Sweden has also enacted a plan to convert 10% of the country's arable land to ecological, or organic, agriculture. To this end, the country increased taxes on energy, fertilizers, and biocides in 1995 by Kr—700 million. The government has also introduced incentives to promote the production of biomass for energy production.

wow! thanks 4 all the info. i have to do this really big project on sweden and let me tell you that really made a difference in i thought they ate there!
3
Peggy Cavanr

Thank you for your helpful article and information. I needed it for a novel I am writing.
4
h.heydari

thanks for your information.im an agricultural expert from iran and like to know more about

have a project on sweden and this is a big help. im glad
6
tynik

this was very helpful for my project so thankss a million :))
9
Andrew

I would like to know what farm products can be imported into Sweden, farm produce that are needed in Sweden, especially from west Africa. I would also like to know who to contact about laws and regulations concerning import of farm produce. I would be very grateful if you can help me on this. Thanks.
10
Ben deschweinitz

this is a great help im doing a research project on Sweden and this really helped!!
13
Ellie

I'm doing a project on Sweden at school and this helped so much. Thanks a million!
14
Bea

I am doing a country project for Sweden. So does anyone know, What is the primary agriculture type practiced in sweden.(In terms of agricultural regions. Example,Pastoral nomadism, commercial agriculture, ranching, etc.)
15
Cosby

I am doing a Swedish agriculture project for school and this helped me a lot!
16
maria

THANKS ALOT im doing a project on sweden in 8th grade. this was a lot of fun reading learnt alot about sweden now i wanna move its a great potato country
17
Dina

What about the agriculture in Sweden in BC?
What are the crops calibrated in Sweden? And when?
18
Bryce

helped me w/ a report! thanks. good bye for now. show it again soon
19
ELIE MASSOUD

Is it true that agriculture land should pay taxes if is not invested ? is there any law about it and may we have a copy in English if it exist ?
20
Stan

I'm doing a country report in 4th grade, thanks a lot!ðŸ˜ƒ
21
Kami

WOW! Very interesting, am from developing countries am looking for import support in agro business any one who is ready keep on touch with me.Let joint arms and go together!
22
Tim

Hej. I am interested in moving to Sweden and becoming a farmer. Will any of those elderly farmers without a succession plan train me how to take over their farm and then give it to me?