The fiscal year runs from 1 January to 31 December. Deficits have been commonplace, but in recent years, efforts have been made to cut back on the growth of taxes and government spending and, since 1986, to remove major state enterprises from the expense of government ownership.

Deficit reduction became a top priority of the government when France committed to the European Monetary Union (EMU). Maastricht Treaty targets for the EMU required France to reduce the government's budget deficit to 3% of GDP by 1997. The government still maintains a fairly tight hold on myriad enterprises, ranging from energy to financial services to industry; government spending accounted for 52% of GDP in 2001. 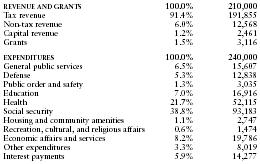