Budget estimates are prepared by the Ministry of Finance and submitted to the legislature. They are referred to the finance committee and subsequently reported back to the full body. Supplementary budgets are usual.

Finland's budget balance continued its sharp deterioration in 1992, as the deep recession resulted in decreased tax revenues and increased social expenditures. Extensive government support for the fragile banking system and increased interest expenditures were also responsible. The rest of the 1990s, however, proved much more auspicious for the fast-growing Finnish economy. GDP grew 5.6% in 2000, fueled by a booming electronics industry. 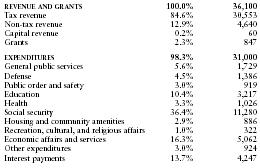