What is now Estonia was ruled in turn by the Danes, the Germans, and the Swedes from the Middle Ages until the 18th century. Russia annexed the region in 1721. During the 19th century, an Estonian nationalist movement arose which by the early 20th century sought independence.

After the 1917 Bolshevik Revolution and the advance of German troops into Russia, Estonia declared independence on 24 February 1918. But after the German surrender to the Western powers in November 1918, Russian troops attempted to move back into Estonia. The Estonians, however, pushed out the Soviet forces by April 1919, and the following year Soviet Russia recognized the Republic of Estonia.

The Nazi-Soviet Pact of 1939 assigned Estonia to the Soviet sphere of influence. The Red Army invaded in June 1940 and "admitted" the Estonian Soviet Socialist Republic into the USSR in August 1940. However, Hitler's forces invaded the USSR in June 1941 and took control of Estonia shortly thereafter. The German Army retreated in 1944, and Soviet forces once again occupied Estonia.

Taking advantage of the relatively greater freedom allowed under Mikhail Gorbachev in the late 1980s, an Estonian nationalist movement, the Popular Front, was launched in 1987. Estonia declared its independence from Moscow on 20 August1991. A new constitution was adopted on 28 June 1992. With much fanfare, the last Russian tanks and 2,000 troops were removed from Estonia on 17 August 1994, ending 50 years of military presence in Estonia. Russia also announced it would begin dismantling two nuclear reactors within Estonia. Estonia demanded the return of more than 750 sq mi of land that Russia considered part of its territory, but that belonged to Estonia before World War II. When Estonia renewed its claim to those lands, the Russian government began constructing 680 border posts, many of which are guarded by armed soldiers and linked by fences.

One of the worst maritime disasters since World War II occurred on 28 September 1994, when the ferry Estonia , en route from Tallinn to Sweden, sank off the coast of Finland, killing about 900 people. Investigators reported that locks on the huge front cargo door of the ferry failed during a storm, letting in a flood of water that caused the ship to sink in only a few minutes. 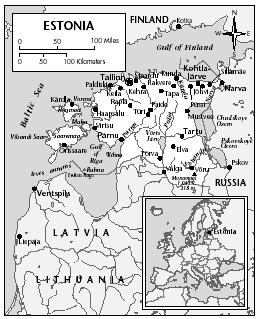 The 1995 parliamentary vote reflected dissatisfaction among rural inhabitants and pensioners and signaled a change from the vigorous free-market reforms that dominated Estonia's transition from Soviet rule. The results of the election, however, didn't significantly alter Estonia's commitment to a balanced budget, a stable currency, or a good foreign investment climate. Following the March 1995 elections, Tiit Vähi was approved as prime minister, but he and his cabinet resigned in October 1995 amidst a scandal within the administration that involved telephone tapping and the clandestine sales of weapons. President Lennart Meri later appointed a new government, which reinstated Vähi as prime minister. In September 1996 Meri won a second presidential term, although the election was turned over to an electoral college after no candidate won the required two-thirds majority in parliamentary balloting in August. Following a no-confidence vote in February 1997, Prime Minister Vähi resigned and was replaced by Mart Siimann, who formed a minority government.

Reformers once again won control of Estonia's parliament in the March 1999 general elections, in which a coalition of center-right parties gained a slim majority, wining 53 out of 101 seats. (However, the left-leaning Center Party won 28 seats, the highest number for a single party.) Mart Laar was named prime minister. The new government was expected to emphasize political reforms as much as economic ones, focusing on the elimination of corruption and inefficiency in the civil service, courts, and police.

Since it gained its independence in 1991, Estonia's foreign policy has focused on integration with Western Europe, with the specific long-range goals of EU and NATO membership. One of these goals received a boost in 1998 when Estonia was invited by the European Union to begin negotiations toward membership. In December 2002, the EU formally invited Estonia, one of 10 new candidate countries, to join the body as of May 2004. A referendum on Estonia's entry into the EU was to be held on 14 September 2003. In November 2002, Estonia was one of seven Central and East European countries to be invited to join NATO, with accession slated for 2004. Internally, Estonia still faces the challenge of integrating its minority population of ethnic Russians fully into the nation's public life.

In September 2001 Arnold Rüütel was elected president, succeeding Meri, who was barred by the constitution from seeking a third consecutive term. Rüütel's victory was seen as a reaction to popular dissatisfaction with the government and growing economic problems in small towns and rural areas, among other reasons. However, because none of the presidential candidates received the required two-thirds vote in parliament after three rounds of voting, an electoral college, composed of all members of parliament and 266 local government representatives, elected the president. In January 2002, Laar resigned as prime minister and Siim Kallas took his place.

Parliamentary elections held on 2 March 2003 resulted in the formation of a coalition government made up of the center-right Res Publica, the right-leaning Reform Party, and the rural party People's Union. Thirty-six-year-old Juhan Parts became prime minister on 10 April.

Estonia has the most advanced information infrastructure of any country in the former communist Eastern block. Around 700,000 of Estonia's approximately 1.4 million people bank online, up from zero in 1997. Citizens use the Internet to access state services and to conduct any number of business transactions, and many people who never owned a landline telephone now rely on wireless phones.

President Rüütel announced his support of the US-led military campaign against the Saddam Hussein regime in Iraq that began on 19 March 2003, although he regretted the fact that a peaceful resolution to the crisis was not achieved.