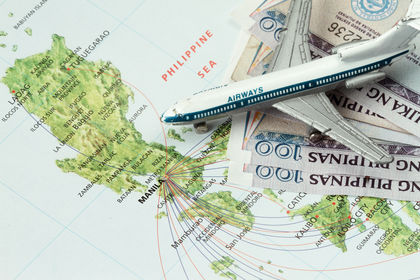 The Philippines is separated from Taiwan on the N by the Bashi Channel (forming part of the Luzon Strait) and from Sabah, Malaysia (northern Borneo), on the SW by the Balabac Strait (off Palawan) and the Sibutu Passage (off the Sulu Archipelago). Bordering seas include the Philippine Sea and the Pacific Ocean on the E , the Celebes Sea on the S, the Sulu Sea on the SW , and the South China Sea on the W . The Philippines has a total coastline of 36,289 km (22,549 mi).

The Philippines claims the Spratly Islands, in the South China Sea, as do China, Malaysia, Taiwan, and Vietnam. About 1,000 Philippine marines were stationed in the Spratlys in 1983. The Philippines also has a claim on Sabah, dating back to 1670.

The Philippines' capital city, Manila, is located on the island of Luzon.

thank you very much for the helpful information on the Philippine's size, location and extent! please add more information so that students like me can answer their assignments! and again, thank you!
2
Gabe

i have no idea how you found this amazing stuff!!!!! thank you for the interesting stuff
3
miss manic

thanks! it helped a lot in my social studies assignment
4
Kim

Thanks for this site. Good information for my research paper in my Doctorate class.
5
eriskay_yna

now that's helpful for my reasearch.


i'll be needing that

thns 4 d answer,it helped me a lot in all my reasearch..
7
princess

it is a good information to my research, thank you!!
8
Hiphop

Thanks for the information. :D

It helped me a lot in my assignment.
10
lorhy

thank you! it help a lot for me and to all the students in their social assignment...
11
lucky

thanks for helpin....it helped me alot on my assignment..
12
jet

it is of great help. thank you so much. May this site be more prosperous. God bless..:-)
13
marie

Why do we need to study Philippine history?

characteristics of the Philippines.

thank you so much for this facts. it helped me in my research paper
15
Leine

thank you very much this is really helpful, but can you give a shorter and more understandable information, thank you, oh! and have a nice day!
17
Mary Lou

I'm very happy that my assignment is already done just because of this site..!

Thanks for the information.It really enriche my knowledge about your country
19
Luz B. Press

Thank you so much for all your hard work that makes it easier for people to do the searching of things about the Philippines. Thumbs up! Keep up the good work. God bless and all the best.

this site was a lot of help to my Healthy and Safe foods class:)
21
mira

Thank You For This Helpful Information. It Really Help Me.
22
Eman

I'm very happy that my assignment is already done just because of this site..!

thank's for this information..:D i answered my assignment thanks a lot.. :))
24
sam canada

nice!!
it really help m with my reports!!
thnks for the info
25
trio-malilibog


it answered my research!! i do hope dat u continue giving and sharing ideas and answered to the students like me..
28
raymart

Thank you so much. It has really helped me with my project.
31
Jerome

Thanks for the info. It will help me size up my boardgame project