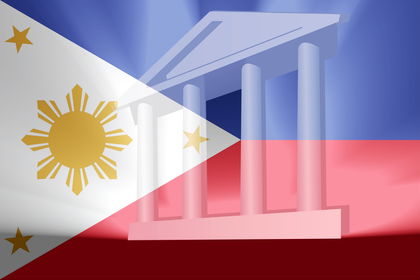 Under the 1973 constitution, the Supreme Court, composed of a chief justice and 14 associate justices, was the highest judicial body of the state, with supervisory authority over the lower courts. The entire court system was revamped in 1981, with the creation of new regional courts of trials and of appeals. Justices at all levels were appointed by the president. Philippine courts functioned without juries. Delays in criminal cases were common, and detention periods in national security cases were long. Security cases arising during the period of martial law (1972–81) were tried in military courts. The 1987 constitution restored the system to what it had been in 1973. Despite the reinstitution of many procedural safeguards and guarantees, the slow pace of justice continues to be a major problem.

Currently, the national court system consists of four levels: local and regional trial courts; a national Court of Appeals divided into 17 divisions; the 15-member Supreme Court; and an informal local system for arbitrating or mediating certain disputes outside the formal court system. A Shari'ah (Islamic law) court system, with jurisdiction over domestic and contractual relations among Muslim citizens, operates in some Mindanao provinces. Supreme Court justices may hold office, on good behavior, until the age of 70.

The constitution calls for an independent judiciary and defendants in criminal cases are afforded the right to counsel. The legal system is based on both civil and common law. It is especially influenced by Spanish and Anglo-American laws. The Philippines accepts the compulsory jurisdiction of the International Court of Justice.

An informal local system for arbitrating or mediating certain problems operates outside the formal court system. There is no jury system. Defendants enjoy a presumption of innocence and have the right to confront witnesses, to present evidence and to appeal.

how could i get the bail bond? I posted a bail for my brother & father due to the case that was filed after them. since before they are so very ignorant, they believe that STL in Bacolod City was legal, but they were apprehended they already plead guilty in court. now im asking how could i get my bail bond since every trial they were there.
2
akire

can you help me with my research paper please. i would like to know about the justice system of the philippines. pls
3
freeman

Is it possible for the Supreme Court to have at least one ( 1 ) Muslim Justice to represent the more than 15% Muslim populace in the country. At least to equitably protect the interest of Muslims in the country? Can this not be done thru congressional legislative?
5
Beng

The philippine judiciary system is inherently corrupt. Their so-called 'family code' is blatant discriminatory and contradicts many treaties on international law. It is sexist and racist especially in its application against gender issues and inheritance. The implementation process of applying international law in local cases is a farce. Often it doesn't exist.
There is no jury and no right of redress against arbitrary 'penalties' applied by the police.
Local so-called attorneys are mostly incompetent and are monetarily driven only. Money talks.
Foreigners thinking about investing in the philippines, think again. Don't.
6
jericho

who selects members of the supreme court, i need to know for a research paper?
8
Denitsa Orlova

How many time is needed to the court to give act of dead ,when some person is missing 5 years yet
9
What is problem of the court

What is the problem and solution of the court in Philippines