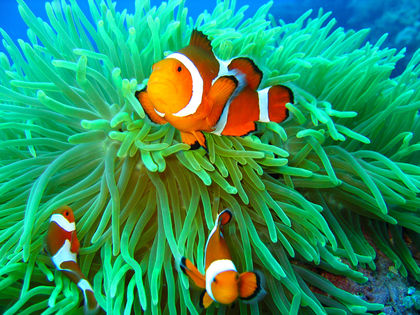 The Philippines supports a rich and varied flora with close botanical connections to Indonesia and mainland Southeast Asia. Forests cover almost one-half of the land area and are typically tropical, with the dominant family, Dipterocarpaceae, representing 75% of the stands. The forest also has vines, epiphytes, and climbers. Open grasslands, ranging up to 2.4 m (8 ft) in height, occupy one-fourth of the land area; they are man- made, the aftermath of the slash-and-burn agricultural system, and most contain tropical savanna grasses that are nonnutritious and difficult to eradicate. The diverse flora includes 8,000 species of flowering plants, 1,000 kinds of ferns, and 800 species of orchids.

Common mammals include the wild hog, deer, wild carabao, monkey, civet cat, and various rodents. There are about 196 breeding species of birds, among the more numerous being the megapodes (turkey-like wildfowl), button quail, jungle fowl, peacock pheasant, dove, pigeon, parrot, and hornbill. Reptilian life is represented by 190 species; there are crocodiles and the larger snakes include the python and several varieties of cobra.

Oh, that's very complete and easy to understand. could you tell me more about philippine's clothes and cultures ? and please add much picture. it won't be interesting without picture. i am not mocking or bullying but it;s true. sorry. please help.
2
Nonimar

it's nice but could you tell me about the distribution of fauna and major categories of animal life?
3
Suzanna Smit

It is nice because it tells all the main animals, and it is easy to understand. What do you mean by flowering plants?
4
Aidan

thanks you its very easy to understand and it really helped finish my essay on the philippines :)
5
Yee

Hi the name's her.
Just asking is there a whole info report for this thing???
6
cynthia