Papua New Guinea relies heavily on imported goods and services, both for consumption and as inputs for its exports. The country registered deficits on current accounts during the early 1980s, after recording annual surpluses in the late 1970s. In the late 1980s, mine closings, civil unrest, and sustained deterioration in prices for the country's principal agricultural exports severely tested the economy and led to a program of structural adjustment supported by the World Bank and IMF. When the economy rebounded in the early 1990s, however, the government lost interest in the reforms and instituted expansionist fiscal policies that led to a decline in international reserves. To restore foreign exchange levels, the government devalued the currency in 1994. When that failed to solve the problem, the government let the kina float, resulting in a depreciation of about 28% by 1996. In 1995, Papua New Guinea reached an agreement with the World Bank and IMF on a series of economic reforms. The subsequent receipt of approximately $200 million in loans in August 1995 substantially bolstered foreign reserves. Another agreement with the IMF in 2000 brought in an additional $115 million in loans to the country.

The International Monetary Fund (IMF) reports that in 2001 Papua New Guinea had exports of goods totaling $1.81 billion and imports totaling $932 million. The services credit totaled $285 million and debit $662 million. The following table summarizes Papua New Guinea's balance of payments as reported by the IMF for 2001 in millions of US dollars. The US Central Intelligence Agency (CIA) reports that in 2001 the purchasing power parity of Papua New Guinea's exports was $1.8 billion while imports totaled $1.024 billion resulting in a trade surplus of $776 million. 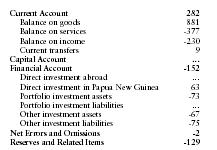 I just want to ask a question that is relevant to the couse im studying right now, " Economic Policy". through your close studies of the balance of payments of PNG, I would want ask in your findings with your working papers, what are the major problems that PNG's balance of payments had faced in the last 5 years?
2
Muntex Josh

What are the real effects and impacts of balance of payments on employment in PNG?