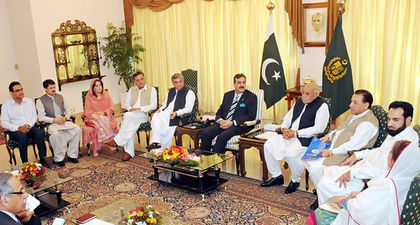 Several figures of monumental stature are associated with the creation and establishment of Pakistan. The poet and philosopher of a revitalized Islam, Mohammad Iqbal (1873–1938), who wrote in Urdu, Farsi, and English, first called for the establishment of a Muslim state on the subcontinent in a statement made in 1930. Mohammad Ali Jinnah (1876–1948), the Quaid-e-Azam, or "Great Leader," rallied the Muslims to this cause and became the first governor-general of the Commonwealth of Pakistan. His "right hand," Liaquat Ali Khan (1896–1951), was the first prime minister of the nation until his assassination. Chaudhury Mohammad Ali (1905–80), a former prime minister, played a key role in the organization of the new government in 1947. Field Marshal Mohammad Ayub Khan (1908–74) served as commander-in-chief of the Pakistani army, as minister of defense in 1954–55, and as president of Pakistan from October 1958 to March 1969. Sir Mohammad Zafrulla Khan (1893–1985), a distinguished jurist, was several times minister of foreign affairs and later a member of the World Court at The Hague; in 1962, he served as president of the 17th UN General Assembly. Zulfikar Ali Bhutto (1928–79), who rose to prominence as founder and leader of the socialist-leaning Pakistan People's Party, was prime minister during 1973–77 and guided the country's political and economic transformation following the loss of East Pakistan. After Bhutto's execution in 1979, his elder daughter, Benazir (b.1953), became titular head of the Pakistan People's Party. Gen. Mohammad Zia-ul-Haq (1924–1987) came to power in 1977 and assumed the presidency in 1978. The Pakistani-born scientist Abdus Salam (1926–96) shared the 1979 Nobel Prize for Physics for his work in electromagnetism and the interaction of elementary particles.

In literature, the paramount position is still held by the great Urdu writers who lived before the establishment of Pakistan. Ghalib (1796–1869) and Iqbal are recognized as the two greatest Urdu poets. Contemporary writers who have won fame include the Urdu poet Faiz Ahmad Faiz (1911–84), imbued with a strongly socialist spirit, and the Urdu short story writer Saadat Hasan Manto (1912–55). Foremost among Pakistan's artists is Abdur Rahman Chughtai (1899–1975).

That's a great idea whoever put this i'm so thankful to him or her cause this article helps me alot with my class work. I was born in USA, but my parents are from pakistan, my teacher give us class work today 10-10-07 first period, the (Q) is ( Find 15 famous people who origin is the same as yours. Tell why they are famous and what they do) I was like "i don't no anything about pakistani famous people, than i went to google and i find this article and i learn alot. Once again thank u so much....
2
anwar

Thnx!!!
This really helped me with my heritage paper for school.
3
zaffer

This is a very good piece of information. I have learnt a lot about our Pakistan is self.
4
torch43

thank you. im doing a project on pakistan and this was very helpful. :)
5
naseer mughal

of the list two belonged to the Ahmadiyya Muslim community, which is heavily persecuted. Sir Mohammad Zafrulla Khan and Dr. Abdus Salam both were dedicated ahmadis. May Allah bless their souls and give them a place in heaven.
9
chubs

Thank you!!! I needed this for a 30 minute class I have to do for a rediculously hard geography class. This helped by miles!
11
ali

Pakistan had great people in past,that were our heroes.they can be shown by their pictures too.
Pakistan was made by Quid a Azam and her younger sister Fatima Jinnah.She did not married,because
Quid a Azam had been suffering from a serious disease.This is first country made by brother and sister efforts.This was a first country came to being on map by the base of religion even we have same in color , languages and culture with other people of our continent.Is that possible some one describe the good Pakistanis people of today.OR the honored by Pakistan
15
Maya

Thanks im doing a project too and this has helped a lot!