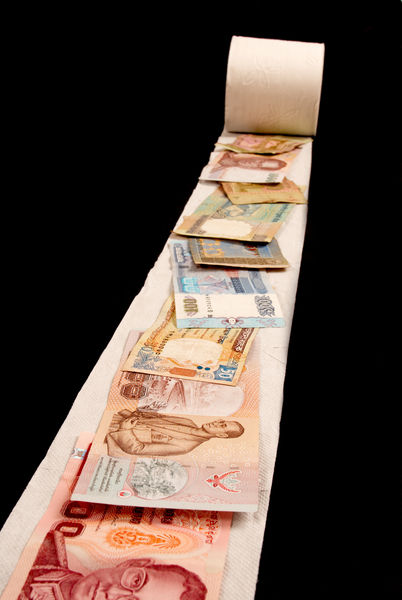 After the founding of the Pakistani state in 1947, the government's economic policy concentrated attention on developing an economic infrastructure, achieving self-sufficiency in food, and developing export industries. A major new land reform program introduced in March 1972 had resulted by March 1975 in the confiscation (for eventual redistribution) of 45.3% of all privately cultivated farmland. By November 1973, the government had nationalized industries in 10 major categories of production. In a third major step, most of the commercial banks were nationalized on 1 January 1974, resulting in control of more than 90% of all banking business by the State Bank and the five newly created units.

By the late 1970s, however, Pakistan's martial law government, claiming the nationalization program had stifled production and discouraged private investment, moved to restore private sector confidence by fostering economic stability and by redressing the balance-of-payments deficit, which was causing large overseas debt obligations. A new five-year plan (1978–83), Pakistan's fifth, reserved 48% of industrial investment for the private sector and set goals for an annual economic growth rate of 7.2%, a4.2% rise in per capita income, and increases of 6% in agricultural output and 10% in industrial production. The plan was allocated a budget of $21 billion, of which 25% was to come from external sources. Indications were that the agricultural sector would meet its target, but that rising oil costs and the burden of providing for the Afghan refugees had impeded progress in other sectors.

The sixth five-year plan (1983–88), with a proposed outlay of R 210 billion, envisioned further investments in water and power development, deregulation to increase private sector activity, and a new emphasis on provision of social services and infrastructural improvements for rural areas. Prime Minister Junejo announced a program for 1986–90, with an outlay of R 70 billion, focusing on rural development, particularly in the areas of education, village electrification, potable water supply, roads, health care, and employment.

By the late 1980s, a number of structural factors resulted in increasingly critical fiscal and balance of payment deficits. With less than 30% of the budget devoted to infrastructural development and other needs in health and education, the prognosis for long-term social and economic development remained poor. In response, a medium-term structural reform program was developed under the government of Prime Minister Benazir Bhutto for implementation in 1989–91. Aimed at correcting fiscal and external imbalances, the program targeted a reform of the tax collection system, tighter government spending controls and monetary management, the privatization of state-owned industrial enterprises, banks and utilities, the phasing out of state monopolies in the transportation, insurance, telecommunications and energy sectors, and liberalization of investment and foreign exchange regulations. Implementation of the ambitious program proceeded under the government of Nawaz Sharif who assumed the prime minister's office in 1991. Results were somewhat uneven, with little effective improvements scored in the country's tax system or its fiscal and balance of payments deficits. While the rapid change of government in 1993 and ongoing political tensions dampened private investment, officials assured that structural reform and privatization would continue.

Fiscal indecision and post-nuclear test economic sanctions dried up foreign investments while budget and trade deficits soared in 1999. The United States lifted some sanctions, clearing the way for the IMF to negotiate a bailout package of $1.5 billion with Pakistan. Key demands included cuts in government budget deficits, further privatization, and improved tax collections. After suspension of payments under a previous arrangement, Pakistan interlard into a 10-month stand-by arrangement as a prerequisite to rescheduling. In December 2001, the government entered into a three-year program under the Poverty Reduction and Growth Facility (PRGF) in preparation for a second rescheduling of debt by Paris Club members, in this case for over $12 billion.

Since the early 1950s through 1993, Pakistan is estimated to have received about $37 billion in aid disbursements, including both long-term and medium-term loans and grants, making it one of the largest recipients in the developing world. For the Indus Valley project, Pakistan received funding of more than $1.3 billion from the IBRD, IDA, ADB, United States, United Kingdom, and other countries. In addition to US aid, Pakistan has also received aid from Iran and the Arab states. New economic aid from the United States was halted in 1990, under the terms of a Congressional amendment requiring certification of Pakistan's status as a nuclear weapons-free country. These sanctions were alleviated in 1996 by the Brown Amendment, but the nuclear tests of 1998 caused further economic sanctions that were only partially lifted by 2000. Since the 11 September 2001 terrorist attacks on the United States, Pakistan has substantial international financial resources and concessions have been mobilized in exchange for the government's support of the War on Terror.

all developments in micro and macro economics and gdp, bop, trade etc.
2
iqbalriaz

I WANT TO RECEIVED ANY INFORMATION ABOUT A SPECIFICE TOPIC ON PAKISTAN ECONOMY.
4
saif ur rehman

can any one give me the sample of any econiomics report because i have to make report on the effects of inflation and price level on economics development , savings and investments of pakistan.
8
saeed buneri

please give me some idia about few topic resilience of pakistan external sector, remttencesin flow and its impacts.
export competitivenes and diversification.
current economic policies and economic growth in pakistan. thanks
9
abeerah

the impacts and effects of economic development on a country should also be told.
10
Tahir

any one plz tell me about the factors of economic growth in Pakistan.
11
mansoor mashal

plz give me on idea about the determinent of the level of national income and employment.
12
Ahmad ali

i want economic growth in pakistan all information
13
Ahmad ali

I stidied this topic its good,
I want more info About our country's new economic gdp,pci,macro aspects acievement,ni,all this
Aspects,
15
Muhammad Usman

I Want to know diversification in Pakistan like Job scenario & other production aspects. Anyone know that kindly share with me. Thanks
16
murad jan

I am the student of B.A .Economic is my best subject and i studied this subject too like. Any know that share with me kindly.