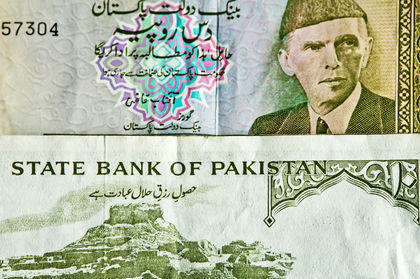 Pakistan's payments problems have been chronic since the 1970s, with the cost of oil imports primarily responsible for the trade imbalance. The growth of exports and of remittances from Pakistanis working abroad (mostly in the Middle East) helped Pakistan to keep the payments deficit in check. Since the oil sector boom began subsiding in the early 1980s, however, remittances declined. Remittances from overseas workers peaked at $2.9 billion in 1982/83, then dropped to $1.4 billion by 1997/98 and $1 billion from 1999 to 2001. This trend especially accelerated during the Gulf War, when nearly 80,000 Pakistanis in Kuwait and Iraq lost their jobs. Only about 25% of these jobs had been regained a year after the end of the conflict. Increased imports and softer demand for Pakistan's textiles and apparel in major markets also caused the current account deficit to further increase. The balance of payments position weakened in 1995/96 as imports grew by 16% and exports by only 6%. The rupee was devalued by 11% during 1995 and 1996 to encourage exports. Nevertheless, foreign reserves fell to around $800 million by mid-1997. By 2000, foreign debt equaled 100% of GDP. The government took steps in the early 2000s to liberalize and deregulate the exchange and payments regime. Pakistan moved to a dual exchange rate system in 2000. An increase in liquid foreign exchange reserves in 2001 was due in part to outright purchases from the kerb market and inflows from international financial institutions. Export growth in 2000/01 was primarily due to higher exports of primary commodities such as rice, raw cotton, and fish, and other manufactures such as leather, carpets, sporting goods, and surgical instruments. Imports increased in 2000/01 primarily due to higher imports of petroleum and petroleum products, and machinery.

The US Central Intelligence Agency (CIA) reports that in 2001 the purchasing power parity of Pakistan's exports was $8.8 billion while imports totaled $9.2 billion resulting in a trade deficit of $399.9 million.

The International Monetary Fund (IMF) reports that in 2001 Pakistan had exports of goods totaling $9.13 billion and imports totaling $9.74 billion. The services credit totaled $1.46 billion and debit $2.33 billion. The following table summarizes Pakistan's balance of payments as reported by the IMF for 2001 in millions of US dollars. 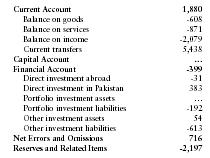 this is article is so good and it has inhanced our knowledge and it is very important for finance students,to know that what is happenning practicaly
2
sharifullah

nice explanations.
good. helpful
i am appearing in bcom final and search alot for this topic and found this topic helpful.
4
nisha

this artical is very informative, and this artical is most important for the business student and i recomended for the finance student to read this artcal and get information as much as u can. THANK YOU
6
shamsulhaq

i studed the artical i found very it very useful becouse it is related with our course.
it good for the sdutents of mba (b&f)and also f0r the students who are studing in business subjects.
7
Rafia Shakir

this is very nice article.it tells us about the balance of payments in pakistan which is going on unfavourable in these days.as such it is very informative article for students.
8
zobia

A very interesting article & provide the real picture of our economy. which realize all young students of pakistan that at this moment our country need us badely.
10
mahak

It is very helping for the finance and economic students.
It tells the correct view of pakistan economy where are we stand?
11
saira

its really informative..one should read such articles to keep himself intouch with the world of Economics..n i am sure that this article is going to help me in my research work..thumbs up..
12
Kalsoom

Its really wonderful!I liked the given information.
13
Aamer

by reading this topic it becomes very easy to understand the Pakistan's BOP. i like this topic it is written in very simple words.
14
collins

thanks 4this article as my worries is almost solved atleast i could related it and compare with what my Lecture wanted me to do. it is indid handy
15
kiran

nice thanks 4this article as my worries is almost solved atleast i could related it and compare with what my Lecture wanted me to do. it is indid handy
16
faisal

The balance of payments of very important informantion for economics students and others.
18
Shomail Khan

this article helped me a lot in my project of Article writing, thanks for your sharing :-)
19
Aleena

This is too informative for the economics students.
20
Habibullah