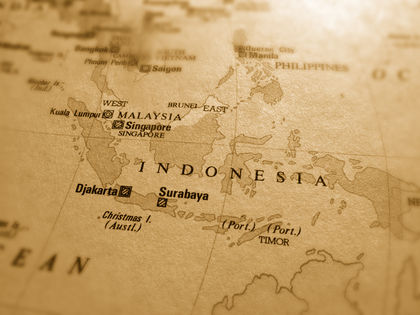 The Republic of Indonesia consists of five large islands and 13,677 smaller islands (about 6,000 of which are inhabited) forming an arc between Asia and Australia. With a total area of 1,919,440 sq km (741,100 sq mi), Indonesia is the fourth-largest Asian country, after China, India, and Sa'udi Arabia. Comparatively, the area occupied by Indonesia is slightly less than three times the size of the state of Texas. It extends 5,271 km (3,275 mi) E – W and 2,210 km (1,373 mi) N – S . The five principal islands are Sumatra; Java; Borneo, of which the 72% belonging to Indonesia is known as Kalimantan; Sulawesi, formerly called Celebes; and Irian Jaya (West Irian), the western portion of the island of New Guinea. Indonesia has land boundaries with Malaysia (on Borneo), Papua New Guinea (on New Guinea), and East Timor (on Timor). It is bounded on the N by the South China Sea, on the N and E by the Pacific Ocean, and on the S and W by the Indian Ocean. Indonesia's total land boundary length is 2,830 km (1,758 mi). Its coastline is 54, 716 km (33,999 mi).

Indonesia's capital city, Jakarta, is located on the island of Java.

I think that this information is very good cause that it is telling the total land mass and how big it is. it is also the fourth biggest land in the world. it is also made of 5 larger islands and also 13,667 smaller islands which make up the total mass that Indonesia and the rest of the island is.
2
Amy

MY NAME IS AMY AND I AM 11 YRS OLD.YOUR INFORMATION IS VERY GOOD. THANK YOU. IT HELPED MY WITH A SCHOOL PROJECT ON INDONESIA. YOU'VE INCLUDED A LOT OF HELPFUL DETAILS. THANKS! (I DIDN'T PLAGURISE)
3
Henriette

Hey, Thanks for the info! It was very helpful for my project on Southeast Asia. Very precise. :]
5
pei yen

Hey!!my name is pei yen and im turning 11 yrs old.your information is really good!! i like what u wrote. thank you!! it really helped me with my school indonesia search! your imformation on indonesia has included lots of details!! THANX!!!!!!!!!!!!!
6
Matilda

HI MY NAMES MATILDA AND IM 11 YEARS OLD. YOUR IMFORMATION REALLY HELPED ME WITH MY SCHOOL PROJECT ON INDONESIA. THANKYOU SO MUCH.

hey people thanks for the info it is really helpful because i have a project on indinesia!!!!!!
9
Chelsea

Hey- awesome info. This helps a lot on my project about Indonesia!
10
basheer

this is really good info im 14 and this helped me with some homework!!
yes im done ;)
11
D

Thank you for helping me, i have a project. And you helped VERY much :D
12
joe

very good info its very precise thanks so much i will defiently use this again :)
13
Weiqi

Thanks a lot, i am also 11 years old and also for my schoolproject
14
y do you want to know?

thank you for this information, it was very helpful for my report:)
15
Steffi Sastera :)

My name is Steffi and I am 13. Thanks a lot!! this is a very good information!! It helped me finding more information for y project!! Bye :)
16
kelly

MY NAME IS ISA AND I AM 11 YRS OLD. YOUR INFORMATION IS VERY GOOD. THANK YOU. THIS HELPS ME FOR MY SCHOOL ASSIGNMENT.
18
anais

Thank you so much, i am twelve and this info helped me greatly with my proj. on Indonesia. Ciao!
19
gautam

i like this website,.,,,. because my girl friend live in indonesia,, so i want to know some details in indonesia ...thanksa
20
ZACHARY

hi my name is jc thank you very much with your information because it has helped me with my school project on indonesia thanks to you i've got 30/30 on my project.
22
mercedew

Good info for my goegraphy project i got lots of info. Going for a A+ for my project thank you ;)
23
KRISTINE

the info regarding total area is confusing, dude. My 10 yo nephew asked me: how can the country's size be just three times of Texas' when it looks so big on map.
Seriously, what kind of child would know total area means just total LAND area?
26
A Rusli

Good article. Only the name "Irian" has been changed into the more original "Papua" since some decades ago, so Irian Barat or Irian Jaya should more accurately be named Papua Barat or West Papua.
27
nicoles

i dont know whats going on the aliens have found me you must protect me i have been probbed already but i had my friend reach inside to remove the devices, i have stolen an artifact that they want