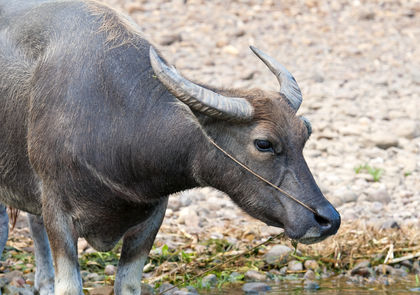 The livestock population of India is huge and animals as a whole play an important role in the agricultural economy even though they often receive inadequate nourishment. Slaughter of cattle in India is prohibited in all but a few states since Hindus believe that cows and other animals may contain reincarnated human souls. The slaughter of buffaloes is not as offensive to the religious beliefs of Hindus, and buffaloes are slaughtered for meat.

In 2001 there were an estimated 219.6 million head of cattle, representing about 15% of the world's total and more than in any other country. There are eight breeds of buffalo, 26 cattle breeds, and numerous crossbreeds. The bovine inventory in 2001 also included 94.1 million buffalo. Other livestock in 2001 included 123.5 million goats, 58.2 million sheep, 17.5 million hogs, 900,000 camels, 750,000 asses, 800,000 horses, and 735 million chickens. Bullocks (steers) and water buffalo are important draft animals. Dairy farming has made India self-sufficient in butter and powdered milk. Dairying in India is undertaken on millions of small farms, where one to three milk animals are raised on less than a hectare (2.5 acres), and yields consist of two to three liters of milk daily. To improve milk production, a dairy development program was begun in 1978 to build up the milch herd to 150 million crossbred cows. Milk output in 2001 from over 35 million dairy cows was estimated at 37.1 million tons, second in the world. Egg production in 2001 was 1,906,000 tons. The production of cattle and buffalo hides and goat- and sheepskins is a major industry. About 53,700 tons of wool were produced in 2001. Silk production that year amounted to 15,000 tons, second highest after China. Animal dung is also used for fuel and fertilizer.

Very Nice Article.Hope you will write many more actually who wrote can i have your name and your address or telephone number would like to confirm a few things and also clarify a few doubts thanks
2
rach

i love this article. it helped me so so much
thankyou
xx
3
Harsh

i would like to have more information and techniques about animal husbandry.please endeavour to send it into my site for study and apply. this is because i love the work but i do not have the needed support. please, help support and assist me thank you very much.
5
vinay

Very nice article.Thank you so much .Its help me in my seminar.Thanx
7
dipika