Cambodia has traditionally been an exporter of primary products and an importer of finished goods. The country's normal trade patterns virtually disintegrated during the war as exports declined, and Cambodia was largely sustained by US-subsidized imports. Under the Pol Pot regime, foreign trade virtually ceased. According to Western estimates, total trade (excluding trade with China) was $3 million in exports and $22 million in imports in 1977. With the installation of the PRK government, foreign trade began to rise in volume. The value of total exports rose from an estimated $3–4 million in 1982 to approximately $10 million in 1985; imports in that year came to about $120 million. Almost all foreign trade has been with the former USSR and its allies, and most imports are in the form of grants. In 1985 Cambodia imported R 100.2 million of goods from the USSR, compared to R 18.8 million in 1984. Cambodia exported R 14.9 million worth to the USSR in 1985, up from R 3.9 million in 1984. The main import categories are food, vehicles, fuels, and raw materials. Cereal imports dropped from 223,000 tons in 1974 to 60,000 tons in 1985. Foreign trade is legally restricted to licensed private-sector firms and government agencies, although there is considerable smuggling between Cambodia and Thailand. In 1985, Cambodia and Vietnam signed an agreement to double their mutual trade in 1986.

In 1986 major export trading partners with Cambodia were Vietnam, the former USSR, Eastern Europe, Japan, and India. For imports major trading partners were the same countries. Soviet Union and CMEA assistance to Cambodia ceased in 1991. The US trade embargo against Cambodia was lifted in January 1992 by President Bush. As of 1992 Cambodian exports were mostly agricultural, comprised of timber mainly and rubber. Logging is a ready source of badly needed export revenues for both the government and the other political factions. The United Nations Development Program (UNDP) estimated that the forest cover had fallen to as little as 40% of the land area by 1992. Cambodia's own forestry department figured that in 1969 forests covered 73% of the country's land area. The UNDP concluded that deforestation was a major threat to Cambodia's development.

Principal trading partners in 1998 (in millions of US dollars) were as follows: 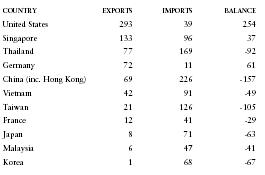 I am interested in more detail of the Cambodia major trade for investors in Africa.