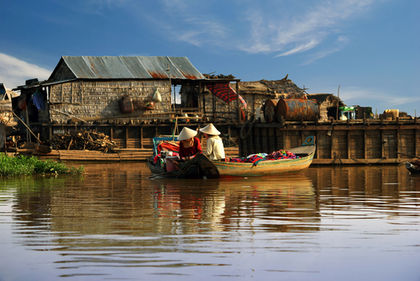 Cambodia's economy has been based traditionally on agriculture. About 85% of the cultivated area is devoted to the production of rice, while rubber trees account for a major part of the remainder. Prior to the war years, Cambodia's rice crop was usually ample enough to permit exports. The Tonle Sap is one of the major fishing reservoirs in Asia, and its products have played a key role in the Cambodian economy and diet. Cattle breeding is another important source of income. During the 1970–75 period, Cambodia's economy came to rely critically on US assistance, as the expansion of the war caused widespread damage and limited economic activity. The Pol Pot regime, which came to power in April 1975, was determined to emphasize the growth of agriculture and restore national self-sufficiency. The entire population was mobilized in a mass labor campaign to improve agricultural production through massive irrigation projects in the countryside. The cities were virtually emptied, and industrial production drastically declined. Private ownership of land was disallowed, and landholdings were transferred to the state or to state-organized cooperatives. All industrial enterprises were similarly transferred to state ownership. Sparse food supplies were distributed through a system of government food rationing and other forms of allotment.

When the PRK government took over in 1979, it was faced with a major challenge in restoring the national economy. The first problem was to end the threat of famine. A massive international campaign to feed the population took place during 1979–82. In the meantime, similar efforts were undertaken to stimulate the industrial sector and expand exports in order to obtain needed foreign exchange. Reliable sources note that the infrastructure was so severely degraded that it had only 40–50% of prewar capacity. By the mid-1980s, the economy had essentially returned to the level of the pre-1975 period, although the regime was still vitally dependent on foreign aid, chiefly from Vietnam and the former USSR. In July 1986, the PRK issued an emergency appeal to international organizations for rice.

In the 1990s Cambodia remained predominantly agricultural with more than 80% of workers employed in agriculture. Inflation rose steadily, the price of domestic commodities increased at least 140% in 1990, but by only 15% in 1998. In 1991 Cambodia halted the free trade of gold as part of an effort to stabilize the value of the currency, the riel. Triple-digit inflation made currency worthless in 1992 and it was pulled from circulation. In 1994 the riel was stabilized at 2,400–2,600 riel to one US dollar. In 1991–1993, the transition period from a command to a market-driven system, the presence of 22,000 UN personnel aided the Cambodian economy, although the growth was mainly urban, barely affecting rural areas. Western consumer goods such as motor vehicles, tinned food, alcohol, and cigarettes, were readily available in Phnom Penh and other cities. In 1990 GDP was negative, increasing to 13.5% in 1991 and estimated of 6–8% in 1992. On 4 January 1992 President Bush announced the lifting of the US trade embargo against Cambodia shortly after the signing of the Paris Peace Agreement on Cambodia in 1991.

One outcome of the May 1993 elections was a division of government portfolios between the winning party, FUNCINPEC, and the surprised runner-up, the Cambodian People's Party (CPP). FUNCINPEC took over the financial and economic portfolios. An aggressive campaign was mounted to restructure tax, investment, banking and currency laws. As part of the battle against official corruption some contracts signed by the previous government were revised or abrogated. The government moved to strengthen the currency and provide new banking legislation. Effective 1 January 1994 were Cambodia's national budget and financial structure laws aimed at establishing central control of the economy. In August 1994, the government adopted a new liberalized foreign investment law with protections against nationalization and guarantees of national treatment except in matter of land ownership. The economy propelled into a period of strong growth, with real GDP increasing at an average annual rate of 7.2% 1993–97. The peak was reached in 1995, when real growth reached 8.4%. Inflation was only 3% in 1995, falling from 17.9% in 1994. During the next year two years, real growth declined, to 3.5% and 3.7%, respectively, while inflation rose, to 9% for both years. A more serious slowdown occurred in 1998 the Asian financial crisis; drought, civil violence, and political squabbles all conspired to slow growth to a barely discernable 1%, while inflation surged to 13.5%.

Cambodia's admission into ASEAN (Association of Southeast Asian Nations), scheduled for 1998, ended up being delayed until April 1999 due to a breakdown into factional violence in July 1997. The after-effects of the Asian financial crisis were also felt, reducing GDP growth to 1% in 1998, and spiking inflation to 12.6%. Recovery in 2000 was propelled by a 29% growth in industrial production, but moderated by a contraction in agricultural output of -2.7% due to the worst flooding in 70 years. Services grew 3.1% in 2000, producing an overall GDP growth rate of 5.4%. Inflation was completely eliminated as prices showed a slight decline of -0.8%. Flooding continued to be a problem in 2001, keeping agricultural growth to 4.4%, while growth in services slumped to 2.4% primarily due to a decline in tourism. Industrial growth was again the main propellant, growing 12.5%, producing an overall GDP growth of 5.3% in 2001. Estimates for 2002 were a 3% growth in GDP with 3% inflation, up from a -0.6% rate in 2001. In November 2001, Cambodia was removed for the US list of Major Drug-Transit Countries by executive action of President George W. Bush because of lack of evidence in recent years of any heroin transiting Cambodia coming to the United States.

This topic is very interesting me,i will appreciate if you send me the detial of Cambodia economic system.

Value Add Tax in Cambodia is one of the popular topic that I can be used to fullfil my master degree at Panasaatra University of Cambodia, it will be help me to get a qualified degree from PUC. Anyways thank you in advanced.

This article is evry important for researcher of economic field of study. I am study Agrlcultural Economic too, so I need this infromation to complete my research.
Thans in advance if you have some information, should be provide
like tish is better for faire releasr information.
Some institute doesn't provide the fact that we cannot help our economic or how can we help our country to develope.

Thank you!
This article really helped with my S.S project!
5
Cody

Thank you!
This helped me alot with my geography project.
6
Sarah

This information helped me a lot for my world food prize essay that I did for this year :)

When is exact date of Cambodia to be released from embargoes ?
8
moda

it can help me on my business project
...
9
kreus dany

I want to know about permanent differences and temporary differences on tax in Cambodia. I would like to say thank you.
10
Tuy Sitha

T want to know about Key Role of Government in Economice.
Thanks you
11
Bridget

Thank you this helped me in my Country Power Point i though Cambodia? Need Help more from the USA and other State's its sad on how people live in grabage and stuff so i would like to Help Cambodia out when i get a chaces to help out.
12
Nicole

I would like to know about the economic system of Cambodia. That would really help me on my Geography Project!
~Nicole