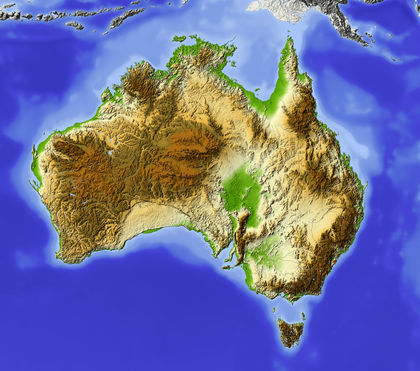 The continent of Australia is divided into four general topographic regions: (1) a low, sandy eastern coastal plain; (2) the eastern highlands, ranging from 300 to more than 2,100 m (1,000–7,000 ft) in altitude and extending from Cape York Peninsula in northern Queensland southward to Tasmania; (3) the central plains, consisting largely of a north-south series of drainage basins, including the Great Artesian Basin, which underlies about 1,751,480 sq km (676,250 sq mi) of territory and is the most extensive area of internal drainage in the world; and (4) the western plateau, covered with great deserts and "bigger plains" (regularly spaced sand ridges and rocky wastes), rising 300 to 600 m (1,000–2,000 ft) high and constituting most of the western half of the continent.

Australian mountains have eroded over recent geological periods, and only about 6% of the continent is above 600 m (2,000 ft); the average elevation is less than 300 m (1,000 ft). The highest point is Mt. Kosciusko, 2,228 m (7,310 ft), in the Australian Alps of the southeastern corner of New South Wales; the lowest point is Lake Eyre in South Australia, 15 m (49 ft) below sea level. In 1983, grains of rock from Western Australia were dated at 4.1–4.2 billion years old, making them the oldest ever found on earth.

The most important river system, and the only one with a permanent, year-round flow, is formed by the Murray, Darling, and Murrumbidgee rivers in the southeast. The Murray River, Australia's largest, rises in the Australian Alps of New South Wales and flows some 2,600 km (1,600 mi) west and southwest to empty into the sea below Adelaide, South Australia. Several other rivers are important, but for the most part they carry great amounts of water in the wet season and are dry for the rest of the year. The largest lakes have no outlet and are usually dry. The coastline is smooth, with few bays or capes. The two largest sea inlets are the Gulf of Carpentaria in the north, between Arnhem Land and the Cape York Peninsula, and the Great Australian Bight in the south. The Great Barrier Reef, the longest coral reef in the world, extends for about 2,000 km (1,243 mi) off the east coast of Queensland.

Note correct spelling of Mount Kosciuszko, the spelling, Mt. Kosciusko, was commonly used but Kosciuszko is the correct spelling. It was named by Polish geologist and explorer Count Paul de Strzelecki in honour of General Tadeusz Kosciuszko, a Polish patriot and freedom fighter. Strzelecki said the name occurred to him because he was "amongst a free people who appreciate freedom".

eat my dust ... nah bored in class thought id comment see if i'd get through, i need this in a.. simpeler form 5 points ,
3
Alex

Thank you for the homework help, stuffing every thing 2 days before.
4
Rose Coughlin

This was a very helpful article, thank you! It is very informative and really taught me about the difference in topography.
5
tate

Thank you so much, I had to cram a full project into one day and this really helped