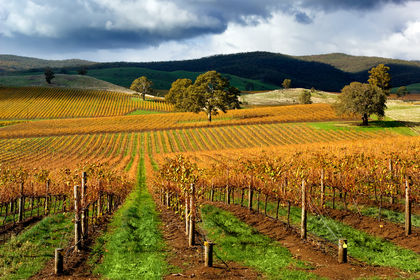 Australia is an important producer and exporter of agricultural products and a major world supplier of cereals, sugar, and fruit. Arable land in 1998 comprised about 53.1 million ha (131.2 million acres), representing about 6.9% of total land area. However, approximately 90% of the utilized land area is in its natural state or capable of only limited improvement and is used largely for rough grazing. Droughts, fires, and floods are common hazards. The area actively cultivated for crops is 6.9% of all land area. Lack of water is the principal limiting factor, but unsuitable soil and topography are also important determinants. As of 1998, some 2,700,000 ha (6,672,000 acres) of land were irrigated. Agriculture has declined from 20% of GDP in the 1950s to about 3% in 2001. Agricultural exports, which accounted for 60% of Australia's exports in the 1960s, now account for 25%. Gross farm product in 1999/2000 was A $28.5 billion. New South Wales and Queensland account for half of the total crop value.

Sugarcane is grown along a 2,000 km (1,200 mi) stretch of coastal land in New South Wales and Queensland. About 95% of sugar production comes from Queensland. A normal crushing season is from June to December. The estimated 1999 harvest from 415,000 ha (1,025,000 acres), yielded about 36.9 million tons of sugar cane. The industry faces problems of excessive supply and price elasticity; sugar is sold primarily to Japan, the United States, Canada, South Korea, Malaysia, China, and Singapore. Although tobacco growing is a relatively small industry, it is important in some areas. In 1999, some 3,000 ha (7,400 acres) were planted with tobacco, and about 7,000 tons were produced.

Cotton has been grown in the coastal river valleys of Queensland for more than a century but on a limited scale, and it has provided only a small percentage of Australia's lint requirements. In the 1980s, however, successful development of cotton-growing areas in New South Wales and Western Australia has resulted in spectacular production increases. In 1985/86, 685,000 tons of cotton were produced (almost triple the amount in 1979/80); in 1999, production amounted to 716,000 tons.

Well kelly, if agriculture wasnt to use the water...who/what would? would you rather agriculture cease to use water, and for australia to stop producing food just so people have water for their gardens, and to wash their cars?
2
Jess

i think that the government should just import the high water use/low value crops, like rice and cotton, and turn those farmers over to low water usage/high value crops, like fruit and veges and grapes because those crops would earn more money and use less water per hectare. it would save more water and earn more money in the long run than wasting lots of water on cheap rice and cotton.
3
Jonah

good web page lots of good factual informationa about australia's agriculture and their main productions. it was very helpful. (I didn't know australia had grapes)
4
ronald

we need to import austrilia fruit and vegetable , pls. let me know who are main supplier and which product they have in cheap.
5
cerys

i thought this was very informing as i am studying this in class at the moment and it helped me get a pass on my essay!
6
Austin Russell