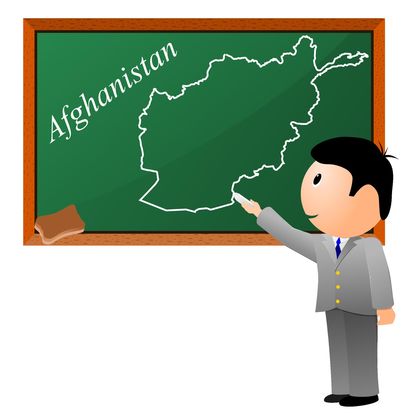 Adult illiteracy for the year 2002 for males was 49%; females, 79%. This is the highest illiteracy rate in Asia. Education is free at all levels. Primary education lasts for six years and is theoretically compulsory for 6 years, but only 53% of boys and 5% of girls were enrolled in elementary school in 2002. Boys and girls are schooled separately. A teacher has on average 58 pupils in an elementary school classroom, but only 28 students in a secondary school classroom. Only 32% of the males and 11% of females graduating from elementary school continue into secondary education. Vocational training is provided in secondary schools and senior high schools, and six percent of students are enrolled in the vocational system. Secondary education lasts for another six years. Children are taught in their mother tongue, Dari (Persian) or Pashtu (Pashto), during the first three grades; the second official language is introduced in the fourth grade. Children are also taught Arabic so that they may be able to read the Koran (Qur'an). The school year extends from early March to November in the cold areas and from September to June in the warmer regions. The school-aged population in Afghanistan is 6,650,000.

In addition to the secular public education system, the traditional Islamic madrassa school system is functioning. At the madrassas, children study the Koran, the Hadith (Sayings of the Prophet Mohammad), and popular religious texts.

Under the Taliban regime, girls were not allowed to have education at all levels. All teachers have civil service status. The educational system is totally centralized by the state.

The University of Kabul, which is now coeducational, was founded in 1932. In 1962, a faculty of medicine was established at Jalalabad in Nangarhar Province; this faculty subsequently became the University of Nangarhar. By 2002 a total of 8 universities had been established in Afghanistan along with 9 pedagogical institutes. The number of Afghans enrolled in higher education was expected to double from 26,000 to 52,000 by 2003. An estimated one thousand women throughout Afghanistan participated in university entrance examinations in 2002.

hey I love afghanistan! It is a very good country to write about yes and also I like it becuase I am doing a project about this country, thank you for the information!

I would like to know some things about the education program for my class project. When does school start and end for the year? When does school start in the mourning and when does it end? How are different grade levels grouped? Does it cost money to go to public school? How is lunch served at school? What are some rules in the school? Impotant t6ests? How was the curriculum come about? What does the education system include?
3
jasline

I need to find information on the education system for my fifth grade project... i need to know how the talibans changed lives of students and girls at school...thank-you
4
Sabrina

hey thank you all these are all usful and comprehensive information ,helping every one .i am student in kabul law and political science that is really to help me do my thisis
6
Hadisa Popal

This is wonderful information however i would like to know a little more in detailed info about how schools work? I mean how do the teachers monitor classes? is it more practical or visual?
7
Ben

Thank you so mch for this info, i really needed it for my big project at school. Thanks so much, this is all the information i needed
8
Peggy

i'm doing a report on education in Afghanistan,compared to education offered in the united states and i have to show how it is a human welfare problem. I need alot of information on the school system in Afhghanistan and the conditions.
9
Victoria Raven

Is there a public policy in place to educate adult who are illiterate?
10
chelsea anderson

hi my name is chelsea and i can't find how the school system work's.

My name is Abdullah and i study M.B.B.S in Pakistan reading this information i became really happy thank you all.
12
Rabha walantina

With lots of thanks, this information was very useful and also helping me to know about the systems of education in Afghanistan.
13
Obaidullah Sadaqat

I used this site for my last project of Public Administration