El Salvador's positive trade balances in the late 1970s changed into deficits after 1980. The main reasons for this development were declines in cotton, sugar, and coffee export earnings, civil war, and the virtual collapse of the CACM market. Capital inflow, principally in the form of remittances, transfers, donations, and credits from the US, has helped cover the deficit. The government in 2000 expected remittances to grow at a rate of 5%–6% from 2000 to 2002–04. Nontraditional and maquila exports were expected to grow by more than 15% each.

The US Central Intelligence Agency (CIA) reports that in 2001 the purchasing power parity of El Salvador's exports was $2.9 billion while imports totaled $5 billion resulting in a trade deficit of $2.1 billion.

The International Monetary Fund (IMF) reports that in 2001 El Salvador had exports of goods totaling $2.9 billion and imports totaling $4.81 billion. The services credit totaled $1.71 billion and debit $1.08 billion. The following table summarizes El Salvador's balance of payments as reported by the IMF for 2001 in millions of US dollars. 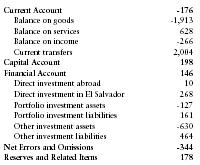