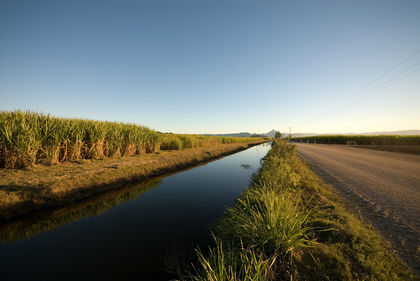 After Cuba, the Dominican Republic is the second-largest Caribbean producer of sugarcane, the nation's most important commercial crop. The State Sugar Council (Consejo Estatal de Azúcar—CEA) operates 12 sugar mills and accounts for more than half of total production. Other large producers are the privately owned Vicini, with three mills, and Gulf and Western, whose largest mill is at La Romana. In 1999, sugar production was 4.4 million tons, down from an average of 7.1 million tons during 1989–1991. Output of sugar has declined annually since 1982, and land is gradually being taken out of sugar production and switched to food crops. Production of raw sugar rose from 636,000 tons in 1990 to 813,000 tons in 1997 but fell to 374,000 tons in 1999. The Dominican Republic has the largest single allocation of the US sugar import quota.

Under a land reform program initiated in 1962, a total of 178,602 hectares (441,333 acres) had been distributed to 36,480 farmers by the end of 1977. The government encourages fuller use of the nation's arable land through extensive land-clearing and irrigation projects and diversification of crops. Some mechanization has taken place on the large plantations, but primitive techniques are generally used. In 1973, the first stage of the Integrated Agricultural and Livestock Development Plan was initiated, calling for an investment of $38.1 million, to be financed by the IDB. The plan was designed to provide credit and technical aid to 45,000 small farmers, improve side roads, and study the country's water resources. The second stage of the plan, in the early 1980s, included extension of farm credits, reforestation, manpower training for irrigation projects, and reorganization of the Dominican Agrarian Institute.

Agricultural exports, mostly in the form of sugar, coffee, cocoa, tobacco, and cigars generated $533.6 million in 2001, or 67.1% of total exports. The government and private sector are emphasizing diversification to nontraditional agricultural crops such as fresh fruits, vegetables, and flowers.

Wow im am in grade 8[13 years old] and this article has helped me so much with a geography project that i have to compare 2 countries with each other and especially the agriculture of the dominican republic... i couldn't find this information anywhere else

thank you, you have helped me with my language arts prodject thanks
3
johanna

Thank you so much, i'm in grade 6 (12) and we have a project on trading partners, and i looked on so many sites for agriculture in the dominican republic, i found nothing . BUt with this site, i found everything ! THANKYOU SO MUCH !
5
Trapaholic 3xclusiv3

I am writting a paper in my writting class! i love this website! (im in 8th grd) Gracias!
6
halle

This has been a very great help for me because I have to do a five page research paper in my Spanish class on the Dominican Republic.

Thank you, you have helped me finally finish my project for my 8th grade homework assignment. THANKS!!!
10
Anonomyous

Thank you so much. This has helped me in my project in Social Studies about the Dominican Republic and our teacher has not given us enough time and this has been a big help!
11
Johana

I'm doing a project on a new product in the Dominican Republic and this article helped me greatly. Very precise and simple information.
12
Jessica

Being in 6th grade(12), this help me a lot in my social studies country report on Dominican Republic. Thank You!
13
Daniella

This helped me so much! I'm in gr.5 and my class had to do a project on eny country besides Canada!Thank you!
14
Joann

I am a grandmother who is in her 3rd year at The University of Toledo. Spanish is my major. We are doing a discussion on the Dominican Republica, no where else could I find so much agricultural information. Thank you. Joann
15
ahmed

i have question on oil.
do you need crude or refine fuel?
16
Jasmyne

this has helped me out so much thank you thank you for all the info.
17
Fernando Hernandez

I need to know the FDA procedure for tuna exporting to US.
18
peyton

this has helped me alot on my reserch than you very much for this information!:)
20
kim

Thank You So Much this information has helped me do my research paper on Dominican Republic. Im in 7th grade and im spanish myself, and i was born and raised there for about 7 years. Then my mom took me to America and i've been here ever since!
21
jaykob

This website rocks! I am a CEO (34 years old) and working on a report on the Dominican Republic for my job. This was tremendous help! Thank you!
23
Dylan

Thank you so much, I've been struggling with trying to get information for my Spanish project and this helped a lot. ^-^
26
Matt

In 2010 the CEA demolished my g-g-grandfather's mill, the Ingenio Consuelo and sold it as scrap iron to China to build a bridge. In 1920 my g-grandfather, William Louis Bass, fled to the states fearing jail time for the expansion of Central Ingenio Romana. He sold Magdalene and Consuelo for $100,000. There is much more, the studies should go deeper.
27
AnnaLaura

Thanks, I am A 6th grader at East And I am doing a project on the Dominican Republic for my LA teacher Mr.Leonhardt, THIS SITE HELPED A LOT THX
28
Elissa

THANK YOU!
This has helped a lot about this information I couldn't find anywhere else!
30
Nekome

Thanks, this helped me out with my Spanish project.
31
Stephany

This is awesome I am in 7th grade(10 years old and this website helped me so much with my vacation project. A vacation project is something that you have to research about a place that you would like to go for a vacation . so thanks aging
32
Michaela

Hello, I am a senior. I am using this information on a project that I am doing for my culinary arts program. This information has helped me in so many ways. Thank you.
33
zoey

thanks, this helped me with my project, and it'snot too confusing like the other websites