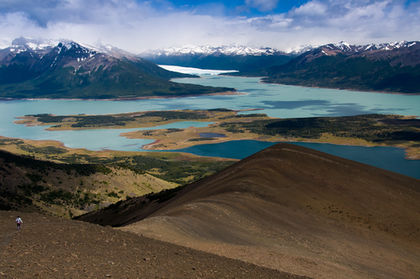 The most famous Argentine is José de San Martín (1778–1850), known as the Protector of the South, who was principally responsible for freeing southern South America from the Spanish yoke.

The tyrannical dictator Juan Manuel de Rosas (1793–1877) ruled Argentina from 1829 to 1852. The political tactics and the pen of the statesman and essayist Domingo Faustino Sarmiento (1811–88) did much to undermine him. While in exile, Sarmiento wrote some of his best works, including Facundo, the story of a rival caudillo. The most literary of Argentina's statesmen was Gen. Bartolomé Mitre (1821–1906), who was president from 1862 to 1868. Mitre, the founder and owner of the newspaper La Nación, wrote several important historical works and biographies. The most famous Argentine political figures of modern times have been Juan Domingo Perón Sosa (1895–1974) and his second wife, Eva Duarte de Perón (1919–52), known as "Evita." Perón's third wife, María Estela ("Isabel") Martínez de Perón, was vice-president during 1973–74 and, after her husband's death, president from 1974 to 1976.

José Hernández (1834–86), one of the first Argentine literary figures to use the uncultured language of the gaucho in his writings, is the author of Martín Fierro, considered the greatest of gaucho poems. Ricardo Güiraldes (1886–1927) kept the "gauchesco" spirit alive in his novel Don Segundo Sombra, a spiritual study of an Argentine gaucho. A less romantic view of these hardy horsemen of the pampas appears in the writings of Benito Lynch (1885–1951). The works of the poet Leopoldo Lugones (1874–1938) form a panorama of all Argentine life and landscape. José Mármol (1817–71) gave a good description of life in Buenos Aires under the tyrant Rosas in his novel Amalia, and Enrique Rodríguez Larreta (1875–1961) wrote the first Latin American novel to win international fame, La gloria de Don Ramiro, a reconstruction of Spanish life during the reign of PhilipII. The leading contemporary writer of Argentina is Jorge Luis Borges (1899–1986), best known for his essays and collections of tales such as Historia universal de la infamia. Other world-famous writers are Julio Cortázar (1914–84) and Adolfo Bioy Casares (1914–1999). Outstanding in the visual arts are the sculptor Rogelio Irurtia (1879–1950) and the painters Miguel Carlos Victorica (1884–1955) and Emilio Pettoruti (1892–1971). Argentina's foremost composers are Alberto Williams (1862–1952), founder of the Buenos Aires Conservatory; Juan José Castro (1895–1968); Juan Carlos Paz (1901–72); and Alberto Ginastera (1916–83).

The most famous Argentine scientist, Bernardo Alberto Houssay (1887–1971), was awarded the 1947 Nobel Prize in medicine for his work on diabetes; French-born Luis Federico Leloir (1906–87) won the Nobel Prize for chemistry in 1970. Notable philosophers include Alejandro Korn (1860–1936), whose work marked a reaction against positivism, and Francisco Romero (1891–1962). Carlos Saavedra Lamas (1878–1959), an authority on international law, received the Nobel Prize for peace in 1936. Adolfo Pérez Esquivel (b.1931), a sculptor and professor of architecture, received the Nobel Peace Prize in 1980 for his work in the Argentine human-rights movement.

freaking awesome! I thought this information and website were very helpful.
2
aalliyah

this is so nice. i got a lot of information for my work thanks
3
Franco