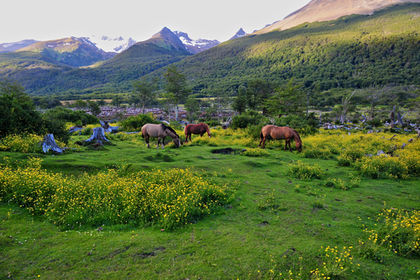 The principal environmental responsibilities are vested in the Ministry of Public Health and the Environment; the Subsecretariat of Environmental Planning in the Ministry of Transportation and Public Works; and the Subsecretariat of Renewable Natural Resources and Ecology within the Secretariat of State for Agriculture and Livestock. In 1977, the Metropolitan Area Ecological Belt State Enterprise was created to lay out a 150-km (93-mi) greenbelt around Buenos Aires, with controls on emission and effluents as well as on building density.

The major environmental issues in Argentina are pollution and the loss of agricultural lands. The soil is threatened by erosion, salinization, and deforestation. In the 1995, Argentina had 33,942 ha (83,872 acres) of forest and woodland. Air pollution is also a problem due to chemical agents from industrial sources. The water supply is threatened by uncontrolled dumping of pesticides, hydrocarbons, and heavy metals. Argentina has a renewable water supply of 360 cu km. Only 77% of all city dwellers and 29% of people living in rural areas have pure drinking water.

Endangered species in Argentina include the ruddy-headed goose, Argentinian pampas deer, South Andean huemul, Puna rhea, tundra peregrine falcon, black-fronted piping guan, glaucous macaw, spectacled caiman, the broad-nosed caiman, Lear's macaw, the guayaquil great green macaw, and the American crocodile. Of the 320 species of mammals in Argentina, 27 are considered endangered. Forty-one of the 897 species of birds are threatened. Five species of a total of 234 reptiles are also threatened. Of the nation's 9,000-plus plant species, 83 were endangered as of 2001.

Water pollution is a huge problem. There are many solutions, but no one has tried to solve them. Can't Argentina get someone to fix this? I honestly wish people would pay more attention to this major problem that is happening all around the world.
3
nick

THIS IS AWESOME BECAUSE IM DOING AN ARGENTINA PROJECT
4
Mohammed

It is great information about the problems in Argentina.. Thanks
5
Emily

Thank you so much! I am doing an Brazil and Argentina project where I have to write about the problems in environment and the government. Anyway thank you again! ðŸ˜ƒðŸ˜ƒ
6
Muskaan

Thank you for this information my project is about issues and the issue I got was environment And the country to go with that was Argentina. This is good information it helped me a lot especially the part about the endangered animals and the lose of forests. Thank you for offering informational texts.
Keep up the good work.
7
erica

this is some good information for my project. thank you!!!
8
ABS

This is some good information . I am doing an Argentina project.
9
soph

What is a solution to loss of agricultural lands?Also this is great info.
11
Celeste

This is very discriptive and helpful I am doing a project about the environmental issues about Argentina and this helps a lot, many thanks to the writer.
12
Nelia

Omg this was so helpful because I had to do research in my homework about this stuff!
13
bob

awesome, many thanks to the author though. also Please talk more about air pollution,this was a big help for a project i'm doing though.
14
john

Thank you so much, I'm doing an environment project and this helped so much
16
tanner

This is very helpful because i am working on an Argentina Project for class.
19
marissa

This helped so much because Iâ€™m writing a research paper on Argentina. Thank U website
21
Aditya Tomar

this article is good because I am doing a Argentina project thanks.
23
bob

what happiends when they do something bad or if there late.
24
Alyssa

This really is so helpful. Thanks for sharing the website with the internet. I wouldn't have finished my Argentina project work without this website. Thanks again!! :D
25
Mercedes

Iâ€™m sorry to hear of what is happening to my country. It is sad to know all these animals are in trouble.
26
Katherine

What are the solutions to these problems? This site is very informative, but what about the solutions?
27
Zoe

Yes, what are the solutions to these issues? This site provides a lot of information, but solution ideas would be ideal!
28
Arya