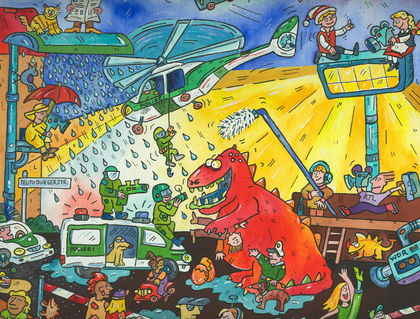 There were no public schools in Rwanda until the 1950s, and secondary education was attainable only at a school founded in 1929 at Butare by Roman Catholic missionaries. With independence, Rwanda began a major expansion of its educational programs; in 1989, education accounted for 25.4% of total government expenditure. However, the Catholic Church continues to play the leading role in education. In the year 2000, projected adult illiteracy rates stand at 33.0% (males, 26.3%; females, 39.4%).

Education is free and compulsory for all children aged 7 to 13, but the law is not widely enforced. Primary school is for seven years, followed by six years of secondary education. Most primary and secondary schools are under the direction of religious missions, but many receive state subsidies. In 1996, there were 1,918 primary schools, with 20,232 teachers and 1,154,768 pupils attending. In 1991-92, 94,586 students were enrolled in secondary schools, with 3,413 teachers. Of these, 51,376 pupils were in vocational schools, 20,121 were in teacher training programs, and 23,039 were in general secondary schools. The pupil-teacher ratio at the primary level was 54 to 1 in 1999. In the same year, 97% of primary-school-age children were enrolled in school.

The National University of Rwanda at Butare was founded in 1963 by the government and a Canadian Roman Catholic order. Other known institutions are the African and Mauritian Institute of Statistics and Applied Economics in Kigali. In 1989, all higher-level institutions had 3,389 pupils and 646 teaching staff. The civil war of the mid-1990s disrupted the educational system, and more recent data is unavailable.

thanks fro the creator and developer of the site, This helped me! got a smart Idea
thanks again and keep moving...
5
chase

i found most of the things i needed to know for my social studies project.
6
martin

I really found this website useful. It was well organized, and I have found everything that I needed for my project on Rwanda. Thanks.
8
nicole

I need to know whever they wear uniforms at school but i agree this is a awsome site keep going as well as your doing now.
10
rogers

thanks for that work. it has assisted me to do my course work abt education system in Rwanda. but give more details.
11
Ingrid

Wow, what a great site.Couldn't find the asnwers to the question and this page gave everthing out. It is really useful and everything and is easy to understand so is the best
12
Grace

I loved this website! So helpful. I was able to find many answers to my questions on Rwanda.