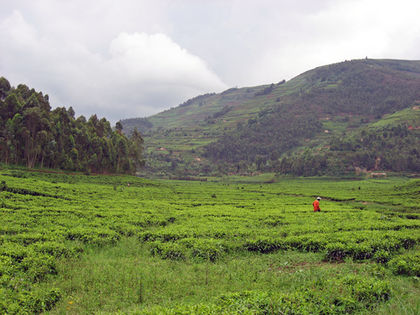 In 1999, about 91% of Rwanda's economically active population earned their living, directly or indirectly, from agriculture. Except for heavily eroded regions, the soil has a good humus content and is fertile, especially in the alluvial valleys and in the volcanic soils of the northwest. About 1.1 million hectares (2.8 million acres) are under cultivation. Subsistence agriculture predominates, and the basic agricultural unit is the small family farm of about one hectare (2.5 acres).

Rwanda has had devastating periods of famine. In 1928–29, more than 400,000 Rwandans died or were forced to migrate; in 1943–44, the figure was 300,000. Government planning has aimed at mitigating such catastrophes by striving for annual increases of food-crop production. Included in the government effort has been the introduction of rice cultivation by agronomists from Taiwan and China. Export diversification has been encouraged by the government, including production of alternatives such as sunflowers, and fruits and vegetables for the European winter market. In 2001, agricultural products accounted for 39% of exports, but there was an agricultural trade deficit of $32.8 million.

This is the information I needed! Thanks!

I think Rwanda will not be developped by agriculture. It is a very tiny country. What it can do is only to produce food for feeding its people but developping the country trough agriculture is a dream. I think other sectors like tourism and industry should be explored.
3
Sim orleans

Agriculuure in Rwanda should be intensive. Though we have a limitted size of land, only extensive agriculture can be limitted and few people engage in agriculture as a business.
5
nduwayezu

It's light to publish those information because it allows Rwandan people to be informed on the contribution of agriculture in our development.But we want also clarification on the land consolidation.
6
NGABONZIZA J. Bosco

The information seems to be verry helpul. Try to find the verry update information. I would like to ask where do you find Rwanda has comparative advantage between cash crop and food crop.
7
Ir.Ndungutse Davis

Thank you for this info.
I'd also like to know the crop in which Rwanda can have a comparative advantage.
8
Mr Tuff

We also need more information not only on the whole country in general but in the other rural villages which do not have the privilege of publishing their posts on the internet walls.
And that will help them to be known and get supported if their projects are real tengible.
Please help them to do it quickly.
9
JOHN