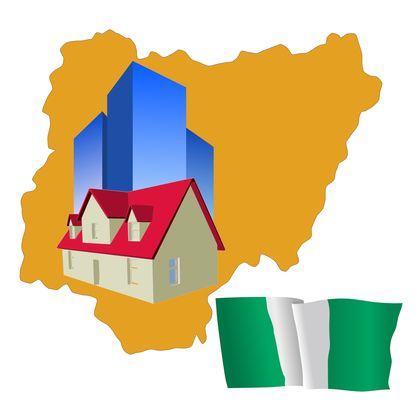 Housing generally has not ranked high on the scale of priorities for social spending and state governments have tended to rely upon local authorities to meet the problem. Efforts at providing low-cost rural housing have been minimal, despite the creation of the Federal Mortgage Bank of Nigeria in 1977, and shantytowns and slums are common in urban areas. Overcrowding in urban housing is a serious problem. It has been estimated that about 85% of the urban population live in single rooms, often with eight to twelve persons per room. Living conditions are poor. In 1996, only about 27% of urban dwellers had access to piped water. Less than 10% of urban dwellers had an indoor toilet.

As of 1979, about 37% of all housing units were cement or brick roofed with asbestos or corrugated iron; 34% were mud plastered with cement and roofed with corrugated iron. In the same year, 44% of urban dwellings were rented, 37% were owner occupied, 17% were rent free, and 2% were "quasirented" at below-average rates. The total number of housing units in 1992 was 25,661,000.

In my opinion, the housing problem in Nigeria has not been given the right attention as the other basic infrastructures like the roads and nepa or phcn, there has to be a deliberate effort on the part of government to ensure that this happens; there are successful case studies all over the world to copy. All that is needed is the right policies and the will to actualize these policies
2
Yusuf

the problem of housing in nigeria is worrisome,because it is one of the essential needs of live. local building materials should be exploit to the maximum,so that cost of construction will be reduced drastically
3
Busola Olaoye

i think housing in Nigeria is a big issue and therefore should not be taken for granted. The planning authorities make the mistake of trying to correct issues on houses after the deed has been done, for example what where they looking at when people where building on pipelines? then when it has been built they come to demolish leaving the people homeless. REGULATION IS BETTER IN COMPLIANCE
4
Abehordun

the inceasant housing problems in Nigeria was caused by and during the colonial period. When the colonial masters neglect building low cost housing for the masses but built GRA for the government workers and the expertise.
5
Harry

To achieve the goal of providing sustainable and affordable housing for the over 140,000,000 Nigerians, government must opt for the exploitation and processing of local raw materials. Sand is invariably one the most abundant natural resources. The mixture of known aggregates of sand and minimal mortar (cement) subjected to good curing process, for instance will make available cheaper and aesthetic interlocking building blocks for the delivery of affordable and sustainable housing that the average Nigerian can afford. But government must first provide the enabling environment by encouraging both the importation and local fabrication of this special block making machines.
6
maruv

pls,l need more explanation on this for more understanding
7
SEUN

WHAT IS FULL DEFINITION OF HOUSING, AND EXPLAIN RURAL HOUSING CONDITION.
8
adekunle ademola

Nigeria housing problems manifest in overcrowding,slum development and development of shanties in our major cities which could be address by radical and revolutionary measures towards ensuring housing policy implementation rather than its formulation.
9
friday

Pleas i want to know evrything about housing in Nigeria?
10
adebowale tolulope

Housing as universally acceptd as a fundamental need of mankind, but in nigeria here d government pocket is the most fundamental, most citizen are not enjoyin an accomondating house takless of a liveable environmen, only the nobles and high income earner that can enjoy housing of thier choice. And nothing is done even though there are policies but corruption would not let it be implemented. Before housing problem can be solved corruption as to b eradicated.
12
Tessybouncing

I think that the Nigeria govt have all it takes to address the issue of housing. Only political wil can change this whole story. With regards to the govt's beautiful housing plans,what has been the hindrances in accomplishing it?.Thus,these housing policies has been a class phenomenon in Nigeria,in d sense that,most of these plans are for the affluent classes and not for the poor.
However the rural areas should b develop to avoid overcrowding in city.
13
Blessing

Am writing a project on the effect of national housing policy on low income earners I need help please tnks.
14
saviour

pls i want to know those factors tha cause housing problems in urban areas of nigeria?
15
Oluwaseyi

How much is the sewage disposal and how much land is used for housing/development.
Thank you very much