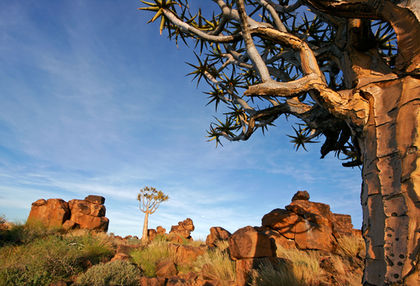 Namibia's climate is the driest in Africa, with sunny, warm days and cooler nights, especially during the winter months. The average temperature along the coast is the summer is 23° C (73° F ); in winter, the average temperature is 13° C (55° F ). The fertile northern strip is always warmer, having a climate similar to that of southern Angola.

Much of Namibia is a land of perennial drought. The annual rainfall, which is concentrated in the November–March period, generally averages more than 70 cm (28 in) in the far north, 2.5– 15 cm (1–6 in) in the south, and 35 cm (14 in) in the central plateau. But the rains often fail: some regions have gone nearly a century without a drop of rain.

this helped a lot on my project for social studies.
3
badge

This has help me a lot in my geography essay. Thanks!
4
David

thanks, this helped me with my essay for African asian studies
5
Ethan

Sure did help with my climate part of my Project! Thanks!