Transport networks are of major importance to the economy. Mozambique's landlocked neighbors-Malawi, Zambia, Zimbabwe, and Swaziland-along with South Africa are the main users of the Mozambican transport system.

The railways are the best-developed sector, with three good rail links between major Mozambican ports and neighboring countries. By independence, almost the entire railway system was owned by the state and passed into the hands of the new government. The route system is 3,131 km (1,945 mi) long; the single largest user is South Africa. There are six routes which make up the majority of the country's railroads: the Nacala Corridor, connecting Nacala to Malawi (300 km/186 mi); the Sena Corridor, linking Beira, via Dondo, to the coalfields at Moatize (513 km/319 mi) and to Malawi (370 km/230 mi); the Beira Corridor, connecting Beira to Zimbabwe (315 km/196 mi); the Limpopo Corridor, linking Maputo with Zimbabwe (534 km/332 mi); the Resano Garcia line, connecting Maputo to South Africa (88 km/55 mi); and the Goba line, linking Maputo to Swaziland (68 km/42 mi). The road network in 2002 totals some 30,400 km (18,890 mi), of which 5,685 km (3,533 mi) are paved, but few roads are suitable for trucks and passenger cars. In 2000, there were 157,600 vehicles, including 81,600 passenger cars and 76,000 commercial vehicles.

Maputo, by far the leading port, has an excellent multipurpose harbor, with exceptional loading, unloading, and storage facilities; it is a major outlet for South Africa, Swaziland, Zimbabwe, Zambia, Malawi, and the eastern DROC. Other ports include Beira, Nacala, and Inhambane, which was reopened in 1980 after a 20-year closure. The Mozambican merchant fleet consisted of three cargo ships with a total GRT of 4,125 in 2002. 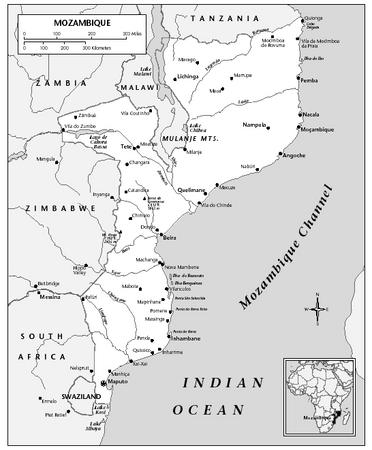 In 2001, there were 166 airports, 22 of which had paved runways. Mozambique Air Lines (Linhas Aéreas de Moçambique-LAM), the state airline, operates both international and domestic services. In 2001, 264,200 passengers were carried on domestic and international flights. The National Enterprise of Transport and Aerial Labor (Empresa Nacional de Transporte e Trabalho Aéreo-TTA) also provides domestic service. Maputo and Beira have international airports.

its awesom i used some info on my report its awesome