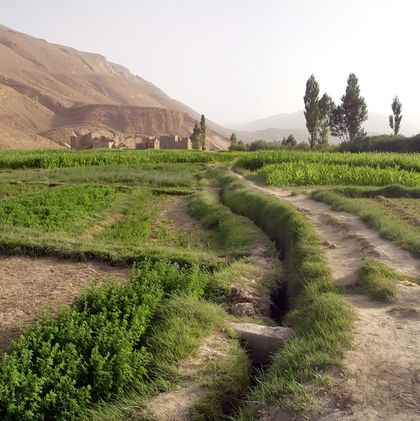 Some 9,895,000 ha (24,451,000 acres), or 22.1% of the total land area, is arable (excluding Western Sahara). About 43% of arable land is devoted to cereals, 7% to plantation crops (olives, almonds, citrus, grapes, dates), 3% to pulses, 2% to forage, 2% to vegetables, 2% to industrial crops (sugar beets, sugar cane, cotton) and oilseeds, and 42% was fallow. The bulk of the indigenous population carries out traditional subsistence farming on plots of less than five hectares (12 acres). A temperate climate and sufficient precipitation are especially conducive to agricultural development in the northwest. In 2001, agriculture (together with forestry and fishing) accounted for 16% of GDP.

Morocco is essentially self-sufficient in food production. Recently, an irregularity in rainfall has necessitated the importation of grains during drought years. As a result of the worst drought in decades, Morocco's cereal crop in 1995 was only one quarter of the average annual amount during the previous 10 years. Pulse, vegetable, and citrus production were also devastated. However, in 1996 Morocco received the highest levels of rainfall in 30 years, leading to record grain production. The principal export crops are citrus fruits and vegetables. The estimated output of principal crops (in thousands of tons) in 1999 was as follows: sugar beets, 3,233; wheat, 2,154; barley, 1,474; sugarcane, 1,373; tomatoes, 857; potatoes, 1,148; oranges, 874; olives, 386; corn, 136; broad beans, 100; garbanzos, 28; sunflowers, 49; and peanuts, 40.

The government distributed some 500,000 hectares (1,235,500 acres) of farmland formerly owned by European settlers to Moroccan farmers in the late 1960s and the 1970s. To encourage Moroccans to modernize the traditional sector, the Agricultural Investment Code of 1969 required farmers in irrigated areas to meet the minimum standards of efficiency outlined by the government or lose their land. These standards applied to all farms of five hectares (12 acres) or more.

Dams and irrigation projects were begun under French rule and have continued since independence. In traditional areas, irrigation is by springs and wells, diversion of streams, and tunnels from the hills, as well as by modern dams and reservoirs. There are dams and irrigation projects on most of the country's major rivers, including the Sebou River in the northwest, which, along with its tributaries, accounts for some 45% of Morocco's water resources. Continued widespread variation in rainfall continues to produce serious droughts and occasional flash floods. In January 1994, the Kuwaiti Economic Development Fund agreed to lend $60 million to the Moroccan government to help finance an irrigation project in the Haouz and Tassaout region of southern Morocco, which will provide irrigation services for 200,000 small farmers. Morocco had 1.29 million irrigated hectares (3.2 million acres) of agricultural land in 1998.

it was great lol it helped me finish my report .. thanks alot
2
Tatyana

Thanks for the help. It was great for my project on Morrocan food!!
3
Fred Weasley

helped me so much- it was nearing impossible to find enough stuff for my morocco food info sheet!!!
4
andrea

Hello good morning,
i m interested to know than in marocco there are crops to sugar cane.
Thanks,
Andrea
5
Mohamed shaheen

Hello may dear i came to morocco in December 2019 in the meting please i need to help,
i finish in Agriculture( crop production).
7
G&G

This helped us finish our pp on Morocco, thanks for making this page.
8
kuruli import export

im interested to export orange to middleast and undua