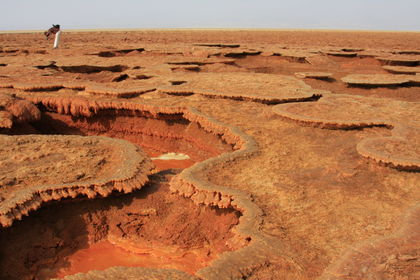 Overgrazing, deforestation, and poor agricultural practices have contributed to soil erosion so severe, particularly in the Tigray and Eritrea regions, that substantial areas of farmland have been lost to cultivation. As of 1994, 600,000 acres of arable land were washed away each year. The combined effects of severe drought and a 17-year civil war have also added to Ethiopia's environmental problems. Ethiopia's forests are also endangered. Each year, the nation loses 340 square miles of forest land. Its forests and woodland decreased by 3.4% between 1983 and 1993. The government did not begin afforestation and soil conservation programs until the early 1970s. Agencies responsible for environmental matters include the Ministry of Agriculture, the Forestry and Wildlife Development Authority, and the Ministry of National Water Resources. The nation's water supply is also at risk. Access to safe drinking water is available to 12% of the rural population and 81% of city dwellers. Ethiopia has 110 cubic kilometers of renewable water resources with 86% used in agriculture. The nation's cities produce 1.3 million tons of solid waste per year.

About 5% of Ethiopia's total land area is protected. In 2001, 35 of Ethiopia's 255 mammal species were threatened. Of 626 bird species, 20 were endangered. One type of reptile in a total of 188 species and 125 plants in a total of 6,500 were also threatened with extinction. Endangered species in Ethiopia include the simian fox, African wild ass, Tora hartebeest, Swayne's hartebeest, Waliaibex (found only in Ethiopia), waldrapp, green sea turtle, and hawksbill turtle.

I am doing a research paper for school on Ethiopia's environment, food and water supply, use of pesticides and herbicides, air pollution, wildlife extinction, and threatened biodiversity. I would like to properly cite and reference this material. Is there a way I can find out the author of this? Also, If there is any other information you have that may be useful, please forward it to my email address. I would like to be as thorough and accurate as possible. Thank you. Ilene Jones
2
Genevieve

I am currently doing a research paper on soil conditions and agriculture in Ethiopia. If there is any more information about this issue, could you please send it to my e-mail address. It would be greatly appreciated.
Thanks a million.
3
josselin

I am doing a reaserch paper its social and envronmental problems in ethiopia.....
4
Favin

Could you please send me the author of this article. I need it for a school bibliography. Thank you! :)
5
samantha

this website is a life saver thanks for putting this up!!!!
7
Gabriel

Im working on an Ethiopian project due soon and this website saved my skin!!!!
=D
8
Berhanu Hailu

I am working in Integrative rural development project .this articleis very importantfor our work it contributed alot of value in the aeras.I want also additional information about Ethiopian agricultural problems.
THanks
9
Karina

i aimed to knaw about the top 3 environmetal issue in ethiopia with its case history.
b\c iam doing an assinment out of 40%
and i want to say tank you for giving wrigt ansewr for me.
GOD bless you
12
katie

hey i would really appreciate it if you gave more information i have a school project due tommorow on ethiopia... this has been helpfull but more info would be great!! :) but if u cant get info by me tonight dont bother sending anything.
13
kalia

I'm doing research on Ethiopia and i would like the author for my paper i loved reading this.

Thanks so much, Lucy
15
oceanjawa

This website was helpful because I'm doing a research project on Ethiopia on there physical environment and their water supply so this was a very helpful site thanks so much for having this site it was more helpful than the ones I'm using.