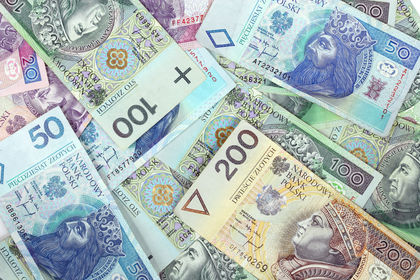 From the end of World War II until 1990, the exchange of the Polish currency, the zloty, was suspended. The government established an elaborate system of several exchange rate regimes. The Polish zloty was valued differently against the same foreign currencies depending on the type of a transaction. For example, western tourists were forced to exchange their currency at a rate making the zloty very expensive, but foreign importers were attracted by competitively priced goods in zlotys. This system of multiple exchange rates ended in the late 1980s.

The liberalization of economic controls during the early 1990s caused the zloty to lose much of its value. By the mid-1990s, US$1 was worth in excess of 10,000 zlotys. Therefore, the National Bank of Poland decided to exchange the banknotes by introducing new coins and banknotes on 1 January 1995. The new Polish zloty was equal to 10,000 old Polish zlotys. The original exchange rate was posted at US$1:2.434 Polish zloty in January 1995. For a time, both the new and the old banknotes were in circulation. Today, old banknotes are no longer accepted for payment.

The National Bank of Poland (NBP) is the sole supplier of money in the economy. Its mission is to implement the monetary policy consistent with maintaining the low inflation rate needed for sustained economic growth. The primary tool used by the NBP was the manipulation of the short-term interest rate charged on loans made to commercial banks. The NBP is independent from the executive branch of government. Its leadership received high praise for its focused approach and has been credited with the high levels of economic activity.

With the adoption of the market economy, Poland opened its stock exchange. The Warsaw Stock Exchange

was, ironically, located in the building built specially as the headquarters of the Polish United Workers Party (a Soviet-style communist party). The increasing popularity of the stock exchange, the growing number of traded stocks, and the volume traded have forced it to move to a new, bigger facilities in recent years. Besides stocks of individual companies, several mutual funds have been established. Their popularity has increased because capital gains and dividends are tax-free in Poland.

The Warsaw Stock Exchange Index (WIG) relates the current market value of companies listed on the main market to the value of companies quoted on the first session of the stock exchange on 16 April 1991. The initial level of the index was 1,000 and rose to 18,083.6 at the end of 1999.

Poland also has an active bond market. The government began issuing securities to finance the budget deficit in the early 1990s and gradually introduced short-, medium-, and long-term fixed rate treasury bonds. Variable rate bonds have been also introduced. Over time, the government has been issuing mostly variable rate bonds. This trend is reflected in changes in volume traded. In 1995, for example, the majority of transactions involved 5-year fixed rate bonds, but in 1999 the majority involved 3-year variable bonds. Overall, during that period, the government issued less bonds and the value of traded bonds in 1999 was roughly one-fourth of that in 1995. Traders and the public preferred trading at the stock exchange.

I have 2 Polish Bonds from around 1938. They are for $200.00 which I inherited from my grandfather. Do they have any value either money wise or as antiques.
2
yvette

I have polish paper money made in 1982 so i just want to know do it have some value.Worth of money is 2000.
4
mike kumar

I have polish money made in 1982 and 1986. Do they stillbhave any value? Plz inform me thanku
6
lucy

I have a Narodowy Bank Polski worth 100 sto zlotych. How much is it worth in USA or if I was to trade for American money?
8
Timothy

I have two polish note Narodowy Bank Polski worth 1000 zlotych made in 1982.
Can I exchange it from Bangladesh?
If it's possible so Please inform me.
10
Ivy

any money issued before 1995 are worthless nowadays...
12
Jack ganda

How should we do my money did not change here in the Philippines...