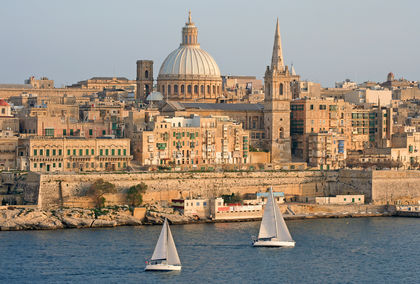 The Republic of Malta

Malta consists of a series of small islands in the Mediterranean Sea, 97 kilometers (60 miles) south of the Italian territory of Sicily and 288 kilometers (179 miles) north of Africa. It is at the crossroads of Africa, Europe, and the Middle East. While Malta is an archipelago (a group of islands), only the 3 largest islands—Malta, Gozo, and Comino—are inhabited. Malta's land area is just 316 square kilometers (122 square miles), and the coastline of the Maltese islands is 140 kilometers (87 miles). Malta is about twice the size of Washington, D.C. The largest city is Valletta, which is also the nation's capital, and the second largest is Sliema.

The population of Malta was estimated to be 391,670 in July of 2000. The Maltese people are mainly descendants of ancient Phoenicians and Carthaginians who originally settled the islands. There are also descendants of Italians and other Mediterranean people in Malta, in addition to British influences from the colonial period. Nonetheless, the population is mainly homogeneous and overwhelmingly Roman Catholic (91 percent).

Malta has no territories or colonies.

MERHBA: Welcome to the Official Website of the Maltese Government. <http://www.magnet.mt> . Accessed September 2001.

Spiteri, Edward J. An Island in Transition: The Economic Transformation of Malta From a British Crown Colony to an Independent Democratic Republic. Valletta, Malta: Progress Press, 1997.

I need to use this website as a reference for an assignment.
Can you please tell me who is the author or organisation responsible for this information and the date when it was last updated?