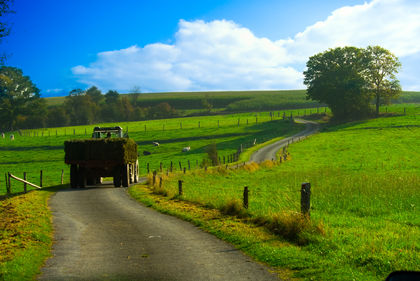 The kingdom's agricultural sector has been declining for some time. Currently, only about 2 percent of the population is employed in agriculture and it accounts for just under the same percentage of the nation's GDP. The main areas of the country under cultivation are in the northern region of Flanders; however, small farms exist throughout Belgium. Some 39 percent of the nation's territory is used for some type of agriculture, including the production of forest products. Approximately 1 percent of the land is used for permanent crops.

There are 2 main trends in Belgian agriculture. The first is the disappearance of the small family farm. Farming is increasingly dominated by large agribusinesses . Over the past 3 decades, the number of small farms has decreased by 80 percent. The second major trend is the expanding output of the sector. New technologies and scientific crop research have combined to produce greater yields. Therefore, even if farmers' total acreage declines, they are still producing more. Between 1995 and 1999, crop production increased by 9 percent.

Agriculture in Belgium is mainly divided between crop production and raising livestock. The nation's main crops include barley, corn, potatoes, sugar beets, wheat, and assorted fruits and vegetables. Sugar beets, potatoes, and barley are the main staples. In 1999, the country produced 6.15 million metric tons of sugar beets, 2.7 million metric tons of potatoes, and 1.63 million tons of wheat. The country is self-sufficient in sugar, and exports certain vegetables and fruits. About 35 percent of Belgium's farms are engaged in crop production. Belgium also re-exports a number of fruits. For instance, bananas are imported into Belgium from the Caribbean and then exported throughout Europe. The nation also imports raw crops, processes them, and then exports them as prepared foods.

Stock farming or livestock production dominates Belgian agriculture. It accounts for 65 percent of the nation's farms. A variety of livestock is raised, including beef, veal, poultry, lamb, pork, and turkey. In 1997, there were 3.1 million head of cattle and 7.3 million pigs on Belgian farms. The beef industry is still recovering from a dioxin scare in 1999. Cattle were accidentally given feed that was contaminated with the cancer-causing chemical dioxin. This led to numerous recalls and various countries around the world banned the import of Belgian beef.

There is also a significant dairy industry and Belgium is self-sufficient in eggs, butter, and milk. In 1997, the nation produced 3.2 million tons of milk, 3.97 million eggs, and 175,000 tons of butter. Belgium also produces a variety of specialty cheeses. Currently, fishing is mainly done for domestic consumption. In 2000, the nation exported $193 million worth of fish, but it imported $833 million worth. The majority of imported fish came from the United States and included lobster, salmon, and prepared seafood meals.

While the nation is a net importer of wood products, it does have a significant timber industry. In 2000, the timber industry was worth $9.9 billion. Total exports were $991 million while imports were $3.5 billion. The United States supplied some 50 percent of Belgium's softwood and plywood needs.

Marijuana is also a large part of Belgium's agricultural. One is allowed to have 3 grams of marijuana in their possession at one time. AND A MAGNIFICENT PART OF AGRICULTURE IT IS. S.W.E.D
2
Beau

Thank you for this good and thorough information about Belgium agriculture. I appreciate seeing this and will now go look for the size of Belgium and also for wildlife.

I am not interested so much in cities but am interested in the current rural life.
4
Jeremy

This was extremely helpful because I'm doing a report on Belgium and it's relationship with other countries.
5
Josh

Thx this was helpful because I needed some stats about the Agriculture of Belgium and here they are!
6
Zuel

Actually I'm looking that kind of information about Belgium agriculture.it's rally helpful for me
7
Levi

Can anyone tell me what is Belgium's biggest agricultural commodity???
9
MR.HARENDRA B.Y.SAWAI

I Am So Interested In Belgium, Department Of Agriculture, Organic Farming. I am. interested in Long Term Tie- Up Kindly Do Accept My Proposal, Thanks!!!
10
Willy deHaes

Very useful information for one who is Keen on doing business with Belgium and for personal consumption.
12
Arun

Anyone help me to find a job in belgium for agri farming field . My country is India .Thank you