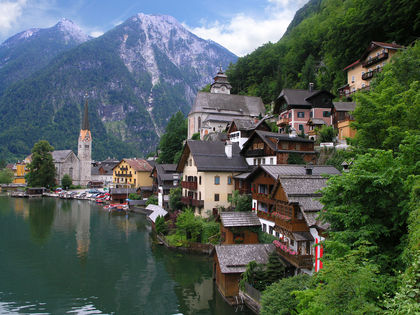 Austria has always been a junction for communication, trade, and cultural exchange in Europe. The capital, Vienna, located on both banks of the Danube River, in the northeast of the country near Slovakia and Hungary, was once the political and economic center of the Austro-Hungarian Empire (1867-1918). It is now the headquarters to some of world's most important organizations, such as the International Atomic Energy Agency (IAEA) and the United Nations Industrial Development Organization (UNIDO). Other international organizations based in Vienna include the Organization for Petroleum Exporting Countries (OPEC) and its Fund for International Development and the International Institute for Applied Systems Analysis (IIASA).

Austria has a population of 8,139,299 (July 2000 est.). The country is highly urbanized and densely populated, with 651 people per square kilometer (251 per square mile). Nearly two-thirds of the people live in urban areas. About 4.0 million are male and 4.2 million (51.5 percent) are female. Due to improved health conditions and a low birthrate, Austria has experienced the rapid growth of its elderly population. Average life expectancy for those born in 2000 was 73.9 year for males and 80.2 years for females. About 21 percent of the population was under 18 years old. If current trends continue, by 2030, the number of children under 18 will drop to only 17 percent. The fertility rate is an estimated 9.9 per 1,000 people, and infant mortality is 6.7 per 1,000 live births. An estimated 99 percent of Austrians age 15 and

older can read and write, and there is 1 teacher for every 11 pupils.

Approximately 98 percent of the population is German. The remainder of the population is divided among a number of ethnic groups, including the Neo-Latins, Slavs, Magyars, Croats, Hungarians, Romany, Sinti, Czechs, and Slovaks. Burgenland province is home to a number of Croats and Hungarians. The majority of Austrian Slovenes live in the Gail, Rosen, and Jaun valleys of southern Carinthia and in some villages in the southern part of Styria. Romany and Sinti live mostly in Burgenland and to some extent in Vienna. Many Czechs and Slovaks also reside in Vienna and in Lower Austria, particularly in the Marchfeld and Tullnerfeld regions. The country receives refugees from a variety of nationalities, many of whom are from the former Yugoslavia.

The agriculturally productive land of Austria covers 28.1 million hectares (69.5 million acres), or 94 percent of the total area. The provinces having the largest proportion of arable land are in the southern parts of the country. The total value of agricultural exports in 2000 was US$2.85 billion and that of imports was US$4.56 billion. A large amount of agricultural exports go to neighboring Italy.

Austrian farms, like those of other West European mountainous countries, are small and fragmented. Their products are relatively expensive, with an emphasis on cash crops . Although Austrian farmers provide about 80 percent of domestic food requirements of the country, the agricultural contribution to the gross domestic product has declined since 1950. The principal agricultural products are wheat, rye, oats, barley, corn, potatoes, sugar beets, and cattle turnips. Besides these principal crops, other crops of considerable magnitude are: buckwheat, flax, tobacco, fuller's thistle, and cabbage. The principal garden products are kitchen vegetables and fruit, of which large quantities are exported. The best fruit districts are in Upper Austria and Styria. The primary meat products are beef and veal, chicken, duck, game, goose, horse, lamb, pork, rabbit, and turkey. The most valuable agricultural exports in 2000 were non-alcoholic beverages, chocolate products, beef, pastry, and processed fruit. Large quantities of wheat and maize are imported, much of it from neighboring Hungary. Important exports are barley, oats, milk, beef, and pork.

Forests occupy just over one-third of the productive area of Austria or 98,000 square kilometers (38,000 square miles). As much as 85 percent of all Austrian forests are dominated by tall timber, such as oak, pine, beech, ash, elm, and spruce, which are important in the paper and pulp industry and in building construction. In 2000 about 17 million cubic meters (590 million cubic feet) of round wood was cut. A comprehensive reforestation and conservation program has been in progress since the early 1950s to compensate for damage inflicted during WWII and for postwar over-cutting of forest trees. Economic development in 1998 and the opening towards the EU market have also affected forestry. Although the number of employees and production decreased slightly, investments in forestry increased.

The fisheries of Austria are very extensive. The numerous rivers of Austria swarm with a great variety of fish. The lake fisheries are largely developed and employ about 4,000 vessels and over 16,000 fishermen. Fishing for sport in the mountain streams is popular and constitutes a large source of income. However, most table fish are imported.

The Austrian manufacturing industry consists of a few large organizations, most of which operate under government control, and a great number of small and medium-size production units. Manufacturing remains focused on medium-technology sectors producing intermediate and capital goods, much of it bound as exports to neighboring Germany. Due to its well-established export markets, the manufacturing sector has a relatively low level of research and development expenditure, at 1.6 percent of gross domestic product in 1999, as compared to the EU average of 1.9 percent. The principal manufacturing products are textiles, metals, alcoholic beverages, leather, paper, sugar, glass, porcelain, earthenware, chemicals, and scientific and musical instruments. Because of the traditional popularity of Austrian wood, glass, textile, and ceramic handicrafts, many establishments produce such goods. The principal industrial products are pig iron, crude steel, rolled steel, motor vehicles, cement, fertilizers, paper, and cotton, woolen, and synthetic yarns and fabrics. Annual production of crude steel totaled about 3.95 million metric tons in 2000. The textile industry in all its branches (cotton, woolen, linen, silk, flax, and hemp) is a historic industry and is mostly concentrated in the southern part of the country.

Because of its wealth of cultural and recreational facilities—including historical sites and winter and summer resorts in the spectacular mountains—Austria has a large tourism industry, which acts as a major earner of foreign exchange. More than 8 percent of Austrians are employed in the tourism industry. Tourism is based on the services of traditional agriculture in the Alpine region of Austria, where tourists appreciate the cultural landscape safeguarded by farmers. As many as 17,000 farmers annually rent private rooms to holiday-makers. In 1998, this category accounted for about 15 million overnight stays out of the total 111 million overnight stays in Austria. Austria's major cities are also a major attraction, for they boast some of the most impressive architecture in Europe and are known for the quality of their theatre, music, and museum art. According to the World Tourism Organization, Austria had 16.7 million visitors in 1997 and these visitors spent US$12.4 billion in the country. Increasingly, however, Austria has experienced a decline in the numbers of overnight stays due to its high prices compared to Eastern European countries.

The contribution of the financial services sector to gross domestic product amounted to 6.3 percent in 2000. It employed some 110,000 people, or 3.6 percent of the workforce. The sector grew by 4.1 percent per year over the 1996-2000 period. Austrians' propensity to save, at about 25 percent of gross domestic product, has contributed to the success of the financial services. Austria's domestic savings to GDP ratio in 1999, according to the World Bank, was more than Germany's 23 percent or the United States' 15 percent. With about 1,000 banks, Austria has more than twice as many banks as neighboring Switzerland. Central and Eastern Europe comprise one area where Austria's banks have a competitive lead over European rivals. Raiffeisen Zentralbank has 2,500 staff and 80 branches in Central Europe and Bank Austria has 100,000 personal customers in the region. In addition to its presence in Western Europe, Austrian bank exposure abroad is also found in neighboring Hungary and the Czech Republic. Bank Austria has also been active in Russia.

At the turn of the 21st century Austria was undergoing a major shift in the nature of its retail establishments from a system based on small, locally-owned shops to one based on larger franchises and foreign-owned chains. EU membership has brought the entrance of large grocery, clothing, and household goods stores to the country, often driving family-owned businesses out of business. Small shops and boutiques once made up nearly 90 percent of the retail sector, but that number began shrinking in 1995. By 1999 large shopping centers and malls accounted for 12 percent of retail sales, and 33 new malls were in development in 2001. German retail chains represent the dominant foreign presence in the retail sector.

Franchising is a small but growing factor in the Austrian economy. Experts estimate that it accounts for about US$830 million in annual sales or just over 2 percent of total retail sales (compared to almost 50 percent in the United States). Current growth in the franchise market of Austria is around 10 percent annually. About 1 in 3 franchise systems operating in the country is of local origin. The top foreign participant in the Austrian franchising economy is Germany, with around 20 percent of the franchise systems, followed by the United States, with about 5 percent of all the systems.

Austria has no territories or colonies.

Thanks for helping me with my 32 page report. Also thanks for the A
2
kush

wow this is really helpfull thnx alot for posting this ..!!1 thnx once again ..!!
3
Suzy

I found this site VERY helpful when i was finding research for a report on Austria. It had even more information then I was looking for, which was even better. Thanks a million for putting out such a helpful website. Keep up the good work!
4
LaRose

I have to do a research report on Austria and I am finding this webpage very helpful.
5
Cienna

thank you for being such a good website and allowing us to read you articals i have been having alot of reasearch papers and you are the website i go to haley,(my best friend who is sitting by me as we speak) loves this artical too.
6
Sadna

Had to do a research report.. thnkx helped me a lot ..
7
Skyler

This website was really hepful...I had to write a paper on Austria and this gave me all of the information I needed.
8
Randy

This website really helped thanks, had a research paper.