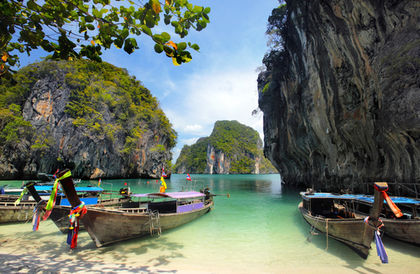 In Thailand, the incidence of poverty or wealth is dependent on a person's occupation, location of residence or work, and level of educational attainment. From the 1970s until the early 1990s the poor were mostly agricultural workers in the rural areas, particularly in the

north, northeast, or southern regions, whose highest level of education was 6 years of primary schooling. Meanwhile, those working in the manufacturing or service sectors in the major cities or in the central region— specifically in the Bangkok metropolitan region—who completed at least 12 years of formal education, were more likely to be economically well-off. Due to the concentration of economic activities in the capital, such as construction of physical infrastructure and job creation, the regional disparities in income and wealth slowly began to widen. As Thailand slowly shifted from an agrarian economy to an industrialized economy, economic resources were shifted to the industrial sector and huge demand for factory workers created huge differences in wage rates between farmers and factory workers. As the contribution of the agricultural sector to the economy decreased so did the demand for farm workers. In the latter years of the 1980s, 80 percent of the people living below the poverty line worked in the agricultural sector.

Poverty in Thailand is not so much a problem of an increasing number of families being unable to provide for their most basic needs, as it is a problem of the huge difference in income between the upper 30 percent and the rest of the population. Thailand's impressive economic growth in the 1980s and 1990s has improved overall living conditions, but the benefits of this national affluence have not been distributed equitably. Those belonging to the lower 30 percent of the population are

merely surviving while the upper 30 percent are enjoying the fruits of the country's affluence with brand new houses and cars, overseas education for their children, and increased savings for emergencies. Despite the fact that more and more Thai families are climbing out of the poverty pit, their earning capacity remains low compared to that of the upper 30 percent.

The government has addressed the increasing incidence of poverty in the different national development plans that are formulated every 5 years. From the second to the seventh National Economic Development Plan, the government formulated different strategies in order to achieve a fairer distribution of income and social services, to create more employment opportunities in the rural areas, to assist parents in their children's education, and to provide credit facilities for small-time business ventures.

Before the Asian financial crisis hit Thailand in 1997, government efforts to alleviate poverty were slowly gaining ground with poverty levels falling from 33 percent in 1988 to 11.4 percent in 1996, according to the World Bank. However, the income distribution remained inequitable with the top 20 percent earning 12.2 times more than the bottom 20 percent in 1988. The disparity

worsened further in 1993 with the top 20 percent earning 15.8 times more than the lowest 20 percent of the population. Average income in the most impoverished region in the northeast was 11.9 times lower compared to Bangkok in 1994. Consequently, rural workers tried to find work in the urban areas, especially in the Bangkok metropolitan area, causing the proliferation of slum areas in the urban cities.

In July 1997, as the Asian financial crisis ravaged the Thai economy, hundreds of workers in the construction and service industries in Bangkok were laid off. These newly unemployed workers moved back to the rural areas to find work in the agricultural sector which was performing strongly in those times. This migration caused the incidence of poverty to increase in the agricultural regions because not all of the unemployed could be absorbed in the agricultural sector. The northeast region experienced the largest increase in poverty during this period, rising from 19.4 percent in 1996 to 30.8 percent in 1999. Overall poverty incidence in Thailand rose from 11.4 percent in 1996 to 13 percent in 1998 as an additional 1.1 million people fell below the poverty line.

Poverty in Thailand can be attributed to several factors. First is the concentration of economic activities in Bangkok and a number of other urban areas. Investment, goods and services, government programs, and well-paying jobs are still largely concentrated in the capital and nearby urban areas despite government efforts to decentralize economic development. The concentration of resources and investment in Bangkok is evidenced by the fact that it contributes over 50 percent of the country's GDP despite hosting only about 10 percent of the population. In contrast, other regions, especially rural areas, suffer from inadequate investment and employment opportunities.

Another reason stems from the failure of the Thai government to provide social safety nets amid the country's rapid growth and industrialization. The government over-prioritized the implementation of financial and industrial reforms and neglected to formulate and implement a comprehensive social service program to protect the most unprepared sectors from the ill effects of rapid industrialization. Moreover, experts have expressed that, had Thai authorities given the same attention to the social sector, it might have even surpassed its current development and would have ensured its future development with a steady source of well-educated and multi-skilled labor as it shifts to technologically sophisticated industries.

A third problem is the weak educational system in the country. Inferior and inadequate education is the root of the growing income gap between city dwellers and villagers. As poverty in the rural areas worsened, many rural folk could not afford to send their children beyond the 6 years of compulsory schooling, making them unqualified for the higher paying jobs in the manufacturing and service sectors. As a consequence, these families were trapped in the vicious cycle of poverty where living conditions of the succeeding generations do not improve due to lack of education.

Another problem is the failure of the government to implement agricultural land reform policies. This failure has resulted in insecure land ownership and increasing tenancy, or production on rented land. As the population increased, people in the rural areas encroached into the forest areas to settle and plant. After several years of residence in these areas, they claim illegal ownership of the land which results in periodic conflicts with government authorities. Due to the government's refusal to issue land titles to legalize the ownership of the land to the farmers who are tilling it, rural workers lack the proper legal documents to secure agricultural support such as credit facilities and technical support and have no security of ownership over the land. This leads to low productivity from the land. Another problem is the increase in the number of farm tenants who till other peoples' land because they either have no land of their own or because they had to sell their own land to pay off accumulated debts.

In 2000, the World Bank reported that Thailand has not fully recovered from its economic recession in 1997. The most recent data revealed that the number of poor increased from 11.4 percent in 1996 to 15.9 percent in 1999. Just like in the past, Bangkok remains affluent while other regions suffer. According to the World Bank's country report for 2000, poverty incidence in 1999 increased from 5.8 percent to 8.8 percent at the outskirts of the urban areas and 14.9 percent to 21.5 percent in the rural areas. At the same time, Thailand continues to suffer from unequal income distribution with the richest 30 percent accounting for some 80 percent of the aggregate national income while the other 70 percent account for roughly 20 percent of the aggregate national income.

According to the World Bank, during the 1990s the Thai government became more aggressive in addressing the root problems of poverty and the ever-widening income disparity. In 1993, the Ministry of Interior launched the Poverty Alleviation project which provides interest-free loans to poor rural households who want to engage in micro-enterprise. Meanwhile, the Ministry of Education is implementing the Educational Loans Program, which provides loans to students from low-income households to encourage them to continue their studies beyond the 6 years of compulsory schooling. The Thai government has likewise launched programs to create jobs in the rural areas by hiring villagers for the construction of rural infrastructure, such as in the case of the Tambon Development Program.

Brilliant. Useful article. Thanks for compiling this. It may be useful to update the statistics though. Some of these are from a decade ago.
2
Tara Gerjarusak

Hi, could you please tell me the causes of poverty? I am doing a project on this and it would really help. Thanks!