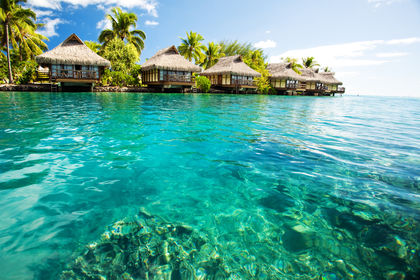 A series of 1,190 coral islands grouped into 26 atolls (a ring-shaped coral reef enclosing a lagoon) located in the Indian Ocean, the Maldives has an area of less than 300 square kilometers (115 square miles) and a total coastline of 644 kilometers (400 miles). The islands form a narrow chain 820 kilometers (510 miles) in length and 130 kilometers (81 miles) in width within an area of 90,000 square kilometers (34,749 square miles) of ocean. Of these islands, around 200 are inhabited and 85 are tourist resorts. Comparatively, the area occupied by the Maldives is about 1.7 times the size of Washington, D.C. The capital city island, Malé, is located within Malé atoll, which is in the center of the strip of islands that makes up the Maldives. The Maldives is the smallest country in Asia.

More than 200 of the 1,190 islands in the Maldives are inhabited, of which only 5 islands have a population of more than 3,000. The majority have a population of 500 or less. Nonetheless, the country has a very high population density of 916 people per square kilometer. Twenty-six percent of Maldivians live on the overcrowded capital island of Malé, with an average of 10 persons per household compared with a national average of 6.5. The implications of the country's high population growth and density are severe. The traditional construction material, coral, is near its point of full depletion. More importantly, the fresh water held beneath the soil surface is in rapid decline. This means that the Maldives faces the prospect of importing a large percentage of its water needs to support the growing population, unless there are fast developments in desalination services on the islands.

Traditional agricultural production in the Maldives is limited by poor soil, a low level of arable land, and a geographically split landmass which disallows large-scale commercial farming. In 1995, only 3,000 hectares of arable land was under permanent crops. There are, however, a number of crops grown for domestic consumption. These include coconuts, bananas, breadfruit, other exotic fruits, betel, chiles, sweet potatoes, and onions.

Until the development of the tourist industry, the fisheries sector was the Maldives principle economic activity and source of export earnings. In 2000, the sector employed about 20 percent of the national workforce and acted as the main source of livelihood for a majority of Maldivians. In addition, it is the second largest source of foreign exchange and provides more than 10 percent of GDP. The government established the Maldives Fishing Corporation in 1979 to exploit the country's vast fisheries resource.

The use of fishing nets is illegal, and as a result, the more labor intensive traditional method of fishing by line and pole dominates. Nonetheless, the productivity of the fisheries sector has improved considerably during the 1990s. Although traditional small boats made of coconut wood remain in use, most are used in conjunction with outboard motors. The mechanization of the fishing fleet has been combined with the introduction of Fish Aggregating Devices (which allow the detection of shoals of fish). This meant that the nominal catch of fish in the Maldives expanded from 71,245 metric tons in 1989 to 118,183 tons in 1998. The opening of the Maldives Exclusive Economic Zone in the early 1990s meant that more Maldivian vessels were fishing in the sea around the islands. In fact, this zone allowed Maldivian fishermen to tap into a range of around 330 kilometers (200 miles). With the decline of fish stocks in the Atlantic Ocean, the price of fish on international markets seems likely to continue rising into the 21st century, although the subsequent increased pressure on Indian Ocean fish stocks threatens one of the foundations of the Maldives economy.

The Maldives' primary industry is the canning and processing of fish. In 1998, $19.06 million of canned fish, predominantly tuna, was exported. The development of the Felivaru Tuna Fish Cannery in the early 1990s was a key factor in the modernization of this industry. The export of dried, smoked, and salted fish constituted an additional $9.07 million of exports in 1998. This constitutes a significant enterprise for levels of employment and national income, although it remains a more traditional industry. The canning industry is expected to continue to thrive and replace more traditional fish exports with the opening of the Kooddoo Fisheries Complex, which included large refrigeration facilities.

The development of manufacturing is limited by the low level of domestic demand, limited skilled labor, and the lack of national resources. This means that many material and labor inputs into domestic goods rely heavily on imports. The economy has diversified into the production of clothing, both for domestic consumption and for export. In 1989, garment exports amounted to $10 million. Because of government initiatives, this had more than doubled to $25 million by 1999.

However, garment factories (some with U.S. investment) rely almost exclusively on the import of materials for the manufacture of their goods. The competitiveness of finished products is reduced due to the costs of passing through multiple tariff boundaries. In an attempt to address this problem, the government has granted duty-free status on the import of fabrics and similar materials essential in the production of clothing and apparel. The government is keen to follow this policy, as it wishes to improve the amount of foreign exchange earnings and, in a similar vein, to create jobs for an ever-expanding and very young population. Other low-level manufactures that have developed in the Maldives through the 1990s are the production of PVC piping, soap, and food products. Between 1989-2000, the average annual growth of the manufacturing sector was 9.4 percent.

The Maldives' principal assets are its beauty, geographical isolation, and rich marine resources. When an Italian entrepreneur set up some uninhabited islands as resorts for foreign visitors in the early 1970s, the tourism sector began to develop very rapidly. Tourists come to spend time relaxing in one of the Maldives' 85 idyllic resort islands. A key pastime for tourists is diving in the cleanest ocean in the world amongst more than 1,000 species of fish, constituting one of world's most species-rich marine areas.

The influx of tourists to the Maldives has been increasing steadily since the 1970s. In 1993, 241,020 tourists travelled to experience the beauty of the Maldives, and by 1997, this number had risen nearly 50 percent to 365,563. Of these, the vast majority came from Western Europe, Japan, and from nearby countries in South Asia. The increase in tourist arrivals has significantly improved the country's receipts from tourism, which increased from $146 million in 1993 to $286 million in 1997. The recent purchase of resorts by the multinational hotel groups, Hilton and Four Seasons, is a clear indication of the projected growth of the Maldives' tourism sector. Yet the cultural effect of foreign influences has been controlled by the government policy of restricting tourist access to resort islands, unless they specifically apply for permission. Also, no Maldivians have their permanent residence on resort islands. The purpose of this is to maintain the population's apparent cultural unity as based upon the Islamic faith.

Maldives has no territories or colonies.

Ciment, J., and I. Ness, The Encyclopaedia of Global Population and Demographics, Chicago: Fitzroy Dearborn, 1999.

Ministry of Tourism, Republic of Maldives. <http://www.visitmaldives.com> . Accessed May 2001.

United Nations Development Programme in the Republic of Maldives. <http://www.mv.undp.org> . Accessed May 2001.

World Bank. Maldives Data Profile and Maldives at a Glance. <http://www.worldbank.org> . Accessed May 2001.

This is very amazing website showing & providing what the viewer just needs.You people are going on v.v.very well.Thanks for good & accurate information.Best of luck. :)
2
collins

which company can i work in malaysia as computer engineering?