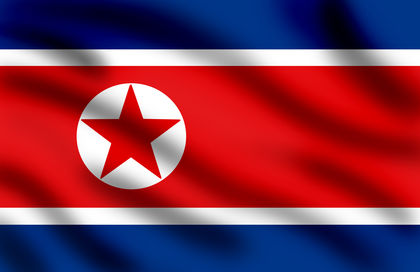 North Korea is in eastern Asia and occupies the northern half of the Korean Peninsula. It borders China to the north, Russia to the far northeast, the Sea of Japan / East Sea to the east, South Korea to the south, and the Korean Bay and Yellow Sea to the west. The country covers an area of 120,549 square kilometers (46,543 square miles), making it slightly smaller than the state of Mississippi. It has 1,673 kilometers (1,039 miles) of land borders and 2,495 kilometers (1,550 miles) of coastline. The capital city, P'yongyang, is situated in the western part of the country, while the other major cities of Hungnam, Ch'ongjin, and Namp'o are in the east, northeast, and west, respectively.

Most of the population follows the Buddhist faith. There are a handful of Christians, but freedom of religion is illusory, religious practice—like all else in North Korea—being manipulated and controlled by the state.

North Korea has significant mineral resources, including the world's largest deposits of magnesite. However, the rest of its resources (brown and lignite coal, iron ore, cement, copper, lead, zinc, gold, tungsten, graphite, salt, and silver) are not sizeable enough to make the country a major world producer, though it may be able to engage in some production should these sectors receive some investment. Precious and non-ferrous metals are the country's most important exports. Aging equipment and flood damage in the mid-1990s led to a fall in North Korea's mineral output. Mining recorded negative growth between 1991 (-6.8 percent) and 1995 (-2.3 percent), when its share of GDP was 8 percent. As with other in- dustries, only significant investment will allow the mining industry to become a vital source of economic growth.

Manufacturing is the largest contributor to North Korea's GDP, accounting for the bulk of industry's share of GDP. Manufacturing produces metallurgical products, armaments, and textiles for export to China, Japan, South Korea, Germany, and Russia. North Korea's heavy industrial base was developed originally by the Japanese and later expanded by the Soviets. However, while the country expanded heavy industry and the production of military hardware, little was invested in light industry or the manufacture of consumer goods. The heavy dependency on the Soviet Union for financing, technology, equipment, spare parts, and energy caused a major decline in manufacturing once the Soviet Union ceased to be a source of assistance. Many industrial units work at a fraction of their original output following the cut in Soviet aid in 1991.

The country's manufacturing facilities need modernization and the expansion of its light and consumer industries. An improved relationship between North and South Korea has brought the North limited investment by 2 South Korean companies, Samsung and LG, who manufacture electronics in North Korea. These companies take advantage of the country's low labor costs. The South Korea-based car company Hyundai has also been negotiating with the North Koreans about the possible creation of an export-oriented industrial complex.

Services are the least developed sector in the North Korean economy, contributing just 28 percent of GDP in 1999. There is no precise record of employment figures for the services sector, but the little available evidence indicates that only a small percentage of the labor force is involved.

Since the 1990s, some tourists have begun to visit North Korea from Taiwan, Singapore, and the West. The country's scenic landscape and mountains offer much potential for the growth of tourism. The government built new hotels in the 1990s, and there is a casino for the use of foreigners, which accepts hard currencies only. Improved relations between the 2 Koreas have made short trips to the North possible for tourists from South Korea. The South Korean Hyundai company took a total of 80,000 South Koreans to Mount Kumgang between November 1998 and June 1999, but the South Korean government suspended such trips after a South Korean tourist was arrested on spy charges. North Korea claims that the number of tourists doubled in 2000 compared to 1999, but no actual figures are available for either year.

The retail sector is also state-dominated, although there is now a little room for limited private initiatives. The sector consists of state-run stores and direct factory outlets for average citizens, farmers' markets, and special shops for the elite where luxury products are sold. There is a chain of hard-currency stores in large cities that were established as a joint venture between the state and the Chongryun. As a general rule, the range of consumer goods is limited and their quality is low.

North Korea has no territories or colonies.

HELLO, I THINK THIS IS VERY HELPFUL AND WILL VISIT OFTEN.
2
Jenifer C.

Thank you so much this was almost exactly what i needed! Yeah now i only have TWO MORE HOURS worth of reasearch to do!
3
Jose R

thank's very helfull information.this really is more the what I was expecting,keeep with the good work in information.