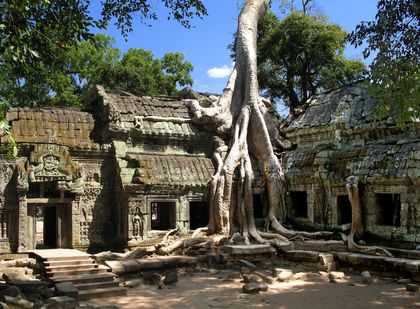 Cambodia is one of the ten nations of Southeast Asia and part of mainland Southeast Asia. It is bordered on the north by Laos and Thailand, on the west by Thailand, and on the east by Vietnam. Its geographic area is 181,040 square kilometers (69,900 square miles), making it slightly smaller than the state of Oklahoma. Its total land boundaries are 2,572 kilometers (1,598 miles), and it has a coastline on the Gulf of Thailand of 443 kilometers (275 miles). The Mekong River flows directly through the country from north to south, eventually flowing into the Mekong Delta of Vietnam. Cambodia's largest city and capital, Phnom Penh, is on the Mekong River. The other major cities in Cambodia are Battambang, Siem Reap (the gateway to Angkor Wat), and Kampong Saom (Sihanoukville), Cambodia's major port.

Unlike many other Southeast Asian countries such as Laos, Burma, Indonesia, and the Philippines, the Cambodian population is relatively homogenous. Approximately 90 percent of the population is Khmer, with 5 percent Vietnamese, 1 percent Chinese, and 4 percent other (Cham, Lao, Tai, and various hill peoples in northeastern areas such as Ratanakiri and Mondulkiri). Khmer is also the official language. Theravada Buddhists are the dominant religious group, claiming 95 percent of the population.

In 1969, 73 percent of Cambodia was forested. By 1997, only 58 percent of the country was forested. Much of this deforestation has resulted from illegal logging activities, with logs destined for Thailand, which has had a long-standing ban on logging. Illegal logging seriously threatens the long-term viability of Cambodia's timber resources. With sustainable forestry, the government could earn an estimated US$40 million to US$80 million in government revenue per year according to some estimates.

Major sources of freshwater fish are the great Tonle Sap Lake in the center of Cambodia and the Mekong and Tonle Sap Rivers. However, deforestation represents a serious threat to freshwater fishing because of increased runoff into rivers and lakes. In 1999 Cambodia produced 124,000 metric tons of fish, of which 57.3 percent were freshwater fish.

Mining contributed only 0.3 percent of the GDP in 1999 and the country has few commercially viable mineral resources. However, in western Cambodia in the Pailin area near Thailand, there is an abundance of high-quality gems, primarily sapphires and rubies. The trade in such gems was a major source of revenue for the Khmer Rouge in support of their guerilla warfare. Even currently the trade in gems is largely part of the informal economy and does not provide benefit to the central government.

Under the new capitalist system, the former socialist state bank became the National Bank of Cambodia (NBC) in 1992. The new system allows for private commercial banks, of which there are now approximately 30. Use of such banking services is limited, since much of the population has a preference for keeping their savings in either gold or U.S. dollars.

With the shift from a socialist to a capitalist system, the public sector has been downsized. Nearly all of the former state enterprises have been privatized . Many individuals lost jobs through this process. Major efforts have also been initiated to reduce the size of the military and police forces, including the elimination of "ghost soldiers" and "ghost police" who were listed only for budgetary purposes.

Cambodia has excellent potential to develop its tourism sector, which has grown significantly since the achievement of political stability in 1998. In 1999 tourism revenues increased 41 percent, and tourist arrivals have been growing 20 to 30 percent annually since 1998. In 1999, the number of visitors was 271,100. The largest number of tourists are from the United States, followed by China, France, and Taiwan.

Cambodia's major tourist attractions are the great Angkor Wat complex, attractive beaches with related tourist infrastructure at Kompong Saom (Sihanoukville), and ecotourism in pristine Ratanakiri Province in Cambodia's remote northeast. The capital Phnom Penh also is a charming city with numerous attractions. Its famous Royal Hotel has been totally remodeled. In the Angkor Wat area the Grand Hotel d'Angkor has been remodeled by the Raffles Group. At one point, 1 cabinet minister even proposed to have all of Cambodia become a national park as part of an effort to make Cambodia unique and attractive. This proposal was not approved, though Cambodia has developed an extensive system of national parks.

The operation of direct international flights to Siem Reap, gateway to the Angkor Wat area, has significantly improved Cambodian tourism, while adversely affecting tourism to the capital, Phnom Penh, which is no longer the sole gateway to Angkor Wat.

Primarily as the result of the presence of many UN military forces in the 1991-93 period and the shift to a free market capitalist system, a commercial sex industry has emerged which has contributed to international tourism, especially to Phnom Penh. Numerous Vietnamese prostitutes are guestworkers in this industry.

RETAIL AND THE INFORMAL ECONOMY.

With a high level of unemployment and underemployment , an informal retail economy provides employment to large numbers, especially in urban areas. In Phnom Penh there are a number of local markets and 2 large markets popular with tourists (the Central and Russian Markets).

Cambodia has no territories or colonies.

Ayres, David. Anatomy of a Crisis: Education, Development, and the State in Cambodia, 1953-1998. Honolulu: University of Hawaii Press, 2000.

Cambodian riel (KHR). One riel equals 100 sen. There are no coins in use, but there are notes of 100, 200, 500, and 1,000 riel. The 1,000 riel note (worth about a quarter in U.S. currency) is the most commonly used. In recent years Cambodia has basically become a dollarized economy. People often pay for goods and services in dollars, but receive small change in riel banknotes.

I want to know about rate of woment's employment in cambodia.
2
Jaden

I am just now finding out about this beautiful country, and I'm excited to find more about southern Asia