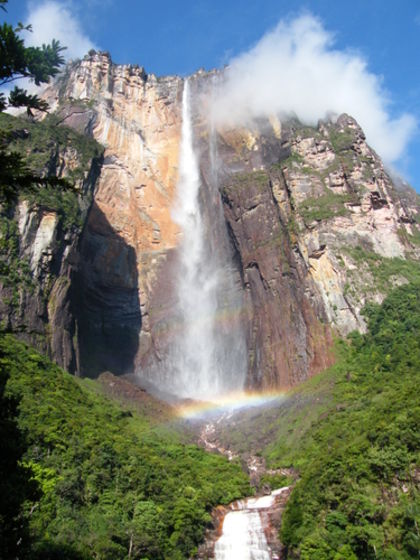 Venezuela, located on the northern coast of South America, has an area of 912,050 square kilometers (352,143 square miles), with a total coastline of 2,800 kilometers (1,740 miles). It is bordered by Colombia to the west, Guyana to the east, and Brazil to the south. Venezuela is a little more than twice the size of California. Caracas, the capital, is located on its northern coast.

As of July 2000, the population of Venezuela was estimated to be 23,542,649, an increase of 21.8 percent over the population in 1990. In 2000, the birth rate was 21.09 per 1,000, and the death rate 4.94 per 1,000. Based on a projected annual growth rate of 1.6 percent, the population is expected to number 27.3 million by 2010. Until 1990, Venezuela had one of the highest population growth rates in the world (3.4 percent annually from 1950-86), despite an educated populace and the wide availability of contraceptives. This high population growth rate is credited to improved sanitary and health conditions from the 1950s onward that resulted in a high birth rate and a low death rate.

After oil, iron is the second most-mined mineral in Venezuela. It is estimated that Venezuela has 1.8 billion tons of high-grade iron ore reserves. In the 1950s, the Venezuelan government gave mining rights to 2 American companies, Bethlehem Steel and the United States Steel Corporation. In 1960, the government formed a corporation, the Venezuelan Corporation of Guayana, that was given mining rights to several iron-ore mines and an interest in the country's only steel complex, Siderórgica del Orinoco (Sidor), that had been built in 1955 by the American companies. In 1975, the government nationalized Sidor and in effect purchased the foreign interest in iron and steel production. The transition was smooth and the American companies were compensated. Because of government mismanagement and the large capital outlay involved, Sidor did not show its first profit until 1986, fully 11 years after the government had acquired it. In 1998, Sidor was privatized once again. In 1999, steel production fell to its lowest point in 7 years because of low prices on the world market, though it rebounded in 2000. In 1998, 35 percent of Venezuela's iron and steel exports went to the United States, its largest trading partner.

In the 1980s, Venezuela enjoyed a reputation as one of the most efficient aluminum producers in the world. During that time, Venezuela exported 60 percent of its aluminum which, after oil, brought in the most foreign dollars. As of 1990, Venezuela's proven reserves of bauxite (aluminum ore) stood at 500 million tons, with 5 billion more tons in probable reserves. As a result of mismanagement the government's aluminum production facilities have debts amounting to US$1.25 billion. The government has consistently refused to sell its interests in its aluminum subsidiaries and is seeking private entities to partner with. Production of aluminum has declined from 627 thousand tons in 1995 to 570 thousand tons in 1999.

Venezuela's coal reserves total 10.2 billion tons of coal. The country's largest coal field, Carbozulia, is located in the state of Zulia and is controlled by a subsidiary of PDVSA. In 1999, the government announced that the coal field would close because it had consistently operated at a loss. Venezuela also has estimated gold reserves of 10,000 tons. Exploitation of one of the country's main gold mines, Las Cristinas, has been placed in limbo because of a legal dispute between 2 Canadian companies. In early 2000, a Chinese company announced its intention of reopening the Sosa Méndez gold mine that had been closed for 30 years.

In 1998, the latest year for which data is available, 13.9 percent of the Venezuelan labor force worked within the manufacturing sector, which accounted for 16 percent of GDP in that year. As measured by the value of their output, the two most important industries were the food products industry with 17.8 percent, and the refined petroleum industry with 10.9 percent. The remaining 71 percent of the manufacturing sector's output was accounted for by industrial chemicals, iron and steel, transportation, and tobacco. From 1980 to 1990, the GDP produced by the manufacturing sector increased by an average of 4.3 percent per year, a figure that fell to 1.8 percent per year from 1990 to 1997.

As of 1988, slightly more than half of Venezuela's manufacturing firms were categorized as basic industries like food processing and wood products, 75 percent of which were small, family-owned businesses. Another 18 percent of firms were categorized as intermediate, like paper or plastics manufacturers. Some 19 percent of firms produced capital goods (goods used to make other products), and 9 percent made miscellaneous goods. Despite the existence of many small firms, as of 1988, a few large firms employed 64 percent of the manufacturing-sector labor force and produced 78 percent of its output.

Retail operations in Venezuela do not look very different from those in the United States. Although there are few department stores, there are numerous malls, and price haggling is uncommon. In 1995, 69.5 percent of the national income (GDP) was spent on private consumption, a figure that fell to 63.2 percent in 1996, rose to 65.8 percent in 1997, to 72.1 percent in 1998, and fell again to 70.2 percent in 1999. The year 2000 saw an increase in sales by clothing and food stores, sellers of telecommunication equipment, electrical appliances, and lottery tickets. Decreased sales were experienced by sellers of cars, pharmaceutical products, and hardware items. Venezuela has a well-developed professional services sector (physicians, attorneys, accountants, engineers and architects), with prestige attached to being a member of one of these professions.

Tourism has improved considerably in Venezuela since the late 1990s, and the industry contributes roughly 6 percent of GDP. In 1999, Venezuela received about 1 million tourists, 3 times greater than 1993 numbers. The government has targeted tourism as one of its priority areas, and intends to partner with the private sector to expand the country's tourist attractions. As of 1994, the latest year for which data are available, a large number of tourists visited from Europe and North America, attracted to Venezuela's beaches, the Andes Mountains, and Angel Falls, the world's highest waterfall.

Since the 1950s, and especially in the 1970s, this industry grew rapidly thanks to profits from the oil industry. By 1989, Venezuela had an extensive array of specialized financial institutions, including 41 commercial banks (9 of them public-sector banks) with hundreds of branch offices, 23 development finance institutions owned by the government, and 29 finance companies. In 1994, a banking crisis forced the closure of a number of the nation's 41 commercial banks, while some others were taken over by the government. By 1999, 41 percent of Venezuela's banks were partially foreign-owned.

Commercial banks remain at the heart of this industry, and they are estimated to hold 70 percent of financial assets. Another 20 percent of those assets are held by finance companies that provide consumer loans and short-term and medium-term loans to industry. Mortgage banks and savings-and-loan institutions hold the remaining financial assets within the economy. In 1999, Venezuelan banks continued to charge an interest rate high enough to allow them to earn a profit given the high cost of money. In that year, when the inflation rate was 20 percent, the banks charged at least 31.89 percent on loans.

Perhaps more so than any other sector, the construction sector has been affected by fluctuations in government spending. The industry thrived from the 1970s through the 1980s when the Venezuelan government used its oil revenues to improve and expand the country's infrastructure. In the 1980s and the late 1990s, with a decrease in government spending, the impact on the construction sector was disproportionately negative. Although the Venezuelan economy suffered a recession of 7.2 percent in 1999, the construction industry experienced a contraction of 20.4 percent, with an unemployment rate of 40 percent. The industry is expected to benefit from construction projects in the state of Verges, which experienced significant destruction from mud slides in 1999, and from a government program to build 63,000 new homes.

Since 1985, Venezuela's currency, the bolívar, has become worth much less in terms of the U.S. dollar. In 1985, US$1 could buy 7.5 bolívars, but by 1999, it could buy 648.25 bolívars. Inflation , resulting from government spending in excess of revenues, is primarily responsible for this phenomenon. Since 1996, Venezuela has used a " crawling peg " exchange rate system, which attempts to slow down the process by which the bolívar loses value against the dollar. The annual rate of inflation has gradually declined since 1996, to a rate of 23.6 percent in 1999 and 13 percent in 2000. One reason for this is because demand for goods and services in Venezuela has declined. It is not clear if more economic reforms will be implemented in 2001, because the government of President Chávez has made it clear that its first priority is political, not economic, reform.

There are 3 small stock exchanges in Venezuela. The most active of these is the Caracas Stock Exchange, where the shares of only 91 companies are listed and only 12 are actively traded. The dollar value of the shares traded fell by 46.6 percent in 1999, partly as a result of the 7.2 percent recession that the economy experienced that year.

Venezuela has no territories or colonies.

Embassy of the Bolivarian Republic of Venezuela in the United States of America. <http://www.embavenez-us.org> . Accessed September 2001.

This is some reall good information to use if you are doing a spanish project.
2
shelby

This site is FANTASTIC. I am doing a project on Venezuela and this site has helped me through it all!
4
leroy jenkins

same here. very helpful i was also doing a project on venezuela and just found it all here.
5
Jamie

This article was amazing and i really enjoyed the info that i found.
7
Sarah

This is great information! I am doing a 30+ page project on Venezuela and one of the sections is the Size, Population, and Nationalities of Venezuela. Thanks so much! VERY HELPFUL! :)
8
shana

This is a great website and i am so thankful for this site because it is providing a lot of information for me to use in my paper., Thanks to the author and publisher for this valuable piece of work!!!