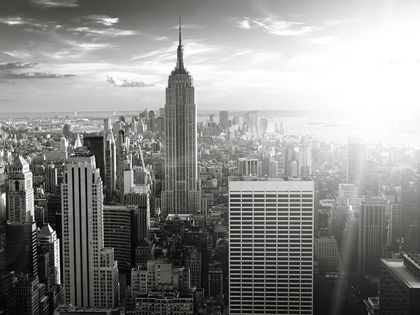 The United States has the largest, most technologically-advanced, and most diverse economy in the world. While the United States accounts for only about 4 percent of the world's population, its GDP is 26 percent of the world's total economic output. The American economy is a free-market, private enterprise system that has only limited government intervention in areas such as health care, transportation, and retirement. American companies are among the most productive and competitive in the world. In 1998, 9 of the 10 most profitable companies in the world were American (even the non-U.S. exception, Germany's Daimler-Chrysler, has a substantial part of its operations in the United States). Unlike their Japanese or Western European counterparts, American corporations have considerable freedom of operation and little government control over issues of product development, plant openings or closures, and employment. The United States also has a clear edge over the rest of the world in many high-tech industries, including computers, medical care, aerospace, and military equipment.

In the 1990s, the American economy experienced the second-longest period of growth in the nation's history. The economy grew at an average rate of 3-4 percent per year and unemployment fell below 5 percent. In addition, there were dramatic gains in the stock market and many of the nation's largest companies had record profits. Finally, a record number of Americans owned their own homes. This long period of growth ended in 2001, when the economy slowed dramatically following a crash in the high-technology sector.

The United States has considerable natural resources. These resources include coal, copper, lead, phosphates, uranium, bauxite, gold, iron, mercury, nickel, silver, tungsten, zinc, petroleum, natural gas, and timber. It also has highly productive agricultural resources and is the world's largest food producer. The economy is bolstered by an excellent, though aging, infrastructure which makes the transport of goods relatively easy.

Despite its impressive advantages, the American economy faces a number of problems. Most of the products and services of the nation are consumed internally, but the economy cannot produce enough goods to keep up with consumer demand. As a result, for several decades the United States has imported far more products than it exports. This trade deficit exists entirely in manufactured goods. The United States actually has trade surpluses in agriculture and services. When adjusted for the surpluses, the U.S. trade deficit in 2000 amounted to a record $447 billion. The United States has been able to sustain trade deficits year after year because foreign individuals and companies remain willing to invest in the United States. In 2000, there was $270 billion in new foreign investment in American companies and businesses.

Another major problem for the American economy is growth of a 2-tier economy, with some Americans enjoying very high income levels while others remain in poverty. As the workplace becomes more technologically sophisticated, unskilled workers find themselves trapped in minimum wage or menial jobs. In 1999, despite the strong economic growth of the 1990s, 12.7 percent of Americans lived below the poverty line. There are other wage problems in the United States. Although the economy has grown substantially, most of the gains in income have gone to the top 20 percent of households. The top 10 percent of households earned 28.5 percent of the nation's wealth, while the bottom 10 percent accounted for only 1.5 percent. There is also a growing number of Americans who are not covered by medical insurance.

Although there is great diversity in the American economy, services dominate economic activity. Together, services account for approximately 80 percent of the country's GDP. Manufacturing accounts for only 18 percent, while agriculture accounts for 2 percent. Financial services, health care, and information technology are among the fastest growing areas of the service sector. Although industry has declined steeply from its height in the 1950s, the American manufacturing sector remains strong. Two of the largest American corporations, General Electric and General Motors, have manufacturing and production as their base, although they have both diversified into the service sector as well. Meanwhile, despite continuing declines, agriculture remains strong in the United States. One of the main trends in the agricultural sector has been the erosion of the family farm and its replacement by the large corporate farm. This has made the sector more productive, although there has also been a decrease in the number of farmers and farm workers.

Since the middle of the 20th century, the United States has aggressively pursued free and open trade. It helped found a number of international organizations whose purpose is to promote free trade, including the General Agreement on Tariffs and Trade (GATT), now known as the World Trade Organization (WTO). It has also engaged in free trade agreements with particular nations. The North American Free Trade Agreement (NAFTA) between the United States, Canada, and Mexico is an example of this. One continuing problem for American companies engaged in foreign trade is that the United States is much more open to trade than many other nations. As a result, it is easy for foreign companies to sell their goods and services in the United States, but American firms often find it difficult to export their products to other countries.

The nation is a net provider of economic aid. It provides $6.9 billion in direct aid to nations. In addition, the United States funds many international organizations. It provides 25 percent of the operating budget of the United Nations and almost 50 percent of the budget for day-today NATO operations. (The North Atlantic Treaty Organization is a military alliance of 19 countries in Europe and North America.) Nonetheless, this aid has only a small impact on the U.S. budget. All spending on international affairs, including the costs of maintaining embassies overseas, foreign aid, and support for international organizations, amounted to $19.5 billion in 1999. That was only 0.01 percent of the federal budget. In comparison, in 1999 the United States spent $26.7 billion to fund the Central Intelligence Agency (CIA).

Amazing article, helped me a lot. Huge thanks to whoever wrote it. Thank you.