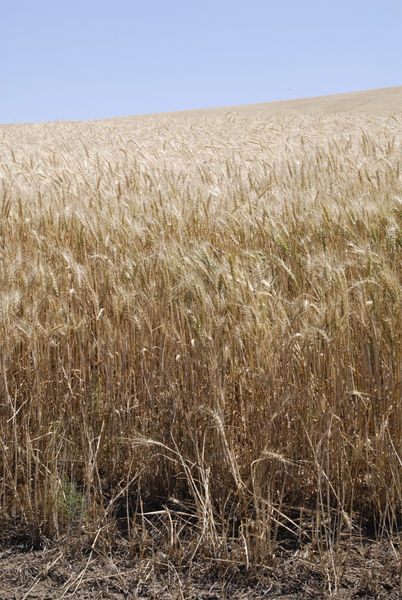 American agriculture is marked by several trends. The first is the continuing decline of small family farms. Since 1979, 300,000 small farms have disappeared in the United States, and since 1946 the number of people employed in agriculture has been cut in half. Increasingly, large companies such as Archer-Daniels Midland (ADM) have come to dominate American agriculture. In 2000, ADM had worldwide sales of $12.9 billion. In the beef industry, 4 firms control 80 percent of the U.S. market. Almost 91 percent of U.S. farms are considered to be small (less than 1,000 acres). Large farms (more than 1,000 acres) made up just 9 percent of farms but received 51 percent of total agricultural revenues in 2000. The second trend is the increasing productivity of the sector. Agricultural production in the United States has increased by an average of 5 percent each year since 1990. In addition, the output of each agricultural worker has grown by an average of 0.84 percent each year. On average, one American farmer produces enough food for 96 people. This improvement is partially as a result of the consolidation of farms and partially a result of new technologies and farming methods. The third trend is the growth in both exports and imports. In 1998 total agricultural exports were $60.5 billion. That same year, total imports were $48.9 billion. The fourth and final trend is the loss of agricultural subsidies . Some of these subsidies are in the form of outright payments in exchange for farmers not growing certain crops and are provided to keep the price of crops high. Since the early 1990s, Congress has gradually reduced these subsidies. However, support and aid for certain types of farmers, including tobacco farmers, continues. After declining to a low point of $9 billion in 1997, government spending on agriculture increased to $23 billion in 1999 and $38.4 billion in 2000. The increases mainly came from emergency aid to farmers because of natural disasters during these 2 years.

About 40 percent of the land in the United States is used for agriculture of some form, including livestock grazing. This includes 431.1 million acres of cropland, 396.9 million acres of pasture, and 71.5 million acres of forests. In 1998, the total crop output of the United States was 489,976,030 metric tons with a value of $102.14 billion. The largest single crop was corn, which accounted for more than half of the nation's crop output with 247,882,000 metric tons. The second largest crop was soybeans with 74,598,000 metric tons. Wheat is third with 69,327,000 metric tons. Other major crops include sugar cane, sugar beets, potatoes, bananas, and coffee. Tobacco also provides substantial cash returns, although yields are small when compared with many other crops. Total animal output in 1998 was $94.19 billion while forestry products, including timber, totaled $24.68 billion. Of the total American livestock, there were 101.2 million head of cattle, 56.2 million pigs, 8.3 million sheep, 6.15 million horses and 1.5 billion chicken. The remaining livestock includes a variety of species such as bison, turkeys, and geese.

Commercial fishing has declined significantly in the United States over the past 30 years. The majority of U.S. fish cultivation is used domestically, and about half is for human consumption. There is a wide variety of species caught, including cod, haddock, pollock, tuna, and salmon. Various shellfish such as lobster, shrimp, or crab account for about 20 percent of the annual harvest, but provide about one-half of the total revenues. Commercial fish farms are increasingly common and used for species such as salmon, catfish, and shrimp. Total fish harvests amounted to $3.7 billion in 1998, of which shellfish totals were $1.6 billion.

There have been dramatic improvements in agricultural technology in the United States. Improvements include increased use of computers, scientific soil and crop analysis, and more sophisticated machinery. Genetic engineering of seeds has also increased crop yields but created controversy over the safety of genetically altered products. There has subsequently been a decrease in soil erosion caused by over-farming and an overall decline in the use of pesticides and fertilizers. However, the pesticides used are much more powerful and lethal than earlier chemicals. About two-thirds of the states have had deep reductions in agriculture. Agriculture has declined most significantly in the New England states and New Jersey. In the West and southern plains, some states have had minor declines, while others have had small increases. The only regions of the nation that have seen major expansion of agriculture have been the middle-Atlantic area and the Pacific Northwest. The states with the largest increases in output were Arkansas, Washington, Delaware, Florida, and Georgia.

Progress in technology and crop yields has made the United States among the most productive agricultural producers in the world. The United States produces about half of the world's corn and 10 percent of its wheat. It also accounts for 20 percent of the globe's beef, pork, and lamb. With such progress in increasing output and the efficiency of agriculture, food prices for American consumers have had little increase over the past 20 years. Americans spend less on food, as a proportion of their income, than any other nation in the world. U.S. consumers spent 10.9 percent of their income on food. In comparison, the average British consumer spent 11.2 percent, the French 14.8 percent, the Japanese 17.6 percent, and Indians spent 51.3 percent.

The United States is the world's largest producer of timber. About 70 percent of the nation's forests are privately owned, but there is also limited logging allowed in federally-owned or managed forests. Almost 80 percent of timber harvested is soft woods such as pine or Douglas Fir. Hardwoods such as oak account for the remaining 20 percent.

I believe that the Government Administration should create incentives to encourage more to-
Work as farmers to grow more food to make sure that we all will always enough for our children-
And to make more land available for food growing, this is my opinion. Thanks.
3
cleo

great work, keep it up! i wish the same would be in kenya soonest, wow.
kindly give me tips on how to improve my agriculture. am a kenyan farmer i wil appreciate your assistance.
4
dr.kalyan basnet

I am 56 years old male. I was graduated in medicine from china in 1984 and completed master of public health from mahidol university Bangkok in 1995 and working in hospitals since 1984 in Nepal. I was born and grown up and completed high school education in 1972, in a remote mountainous and forest covered village, which is: Nepal, ramechhap, makadum simle.

I want work in Canada, Australia, Siberia of Russia, Alaska of America as farmer in farm, diary industries in those countries. please give job. thanks. Obediently. dr. kalyan basnet, Nepal.
5
John Pesel

What procentage of the USA economy is Agriculture ???

Hello my name is Charlene Hesketh, I am from the United Kingdom and I am doing a project for college about the cost of farming in America. I was wondering if you could answer a view questions.

How much would it cost to set up a large fruit and vegetable farm?

How much would it cost to run a farm per year?

I would really appreciate any help you could give me in these areas.

Thank you for your time.

hi, my name is sruti and i am doing a project in my class, can you please help me answer my questions.
what are the number and types of crops changed or stayed the same?
the impact of the farming conglomerates on the agricultural industry in the US; the impact on the family owned farm; and the fate of heritage foods ?
8
MichaelNic

Peace be upon you, I am Ahmed from Iraq

A country like Turkey is considered the best agricultural country in the world, but it lacks some agricultural products such as blue berries and red berries. How can we grow these products in the countries of Turkey? Thank you.