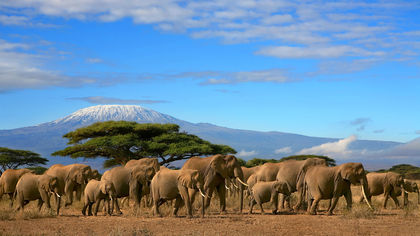 A relatively large country located in East Africa, Tanzania has a total area of 945,087 square kilometers (364,900 square miles), rendering it slightly larger than twice the size of California. The area of Tanzania includes the islands of Mafia, Pemba, and Unguja; the latter 2 form a semi-autonomous region called Zanzibar that is part of an official union with the republic of Tanzania. With a coastline that spans 1,424 kilometers (883 miles), the eastern part of Tanzania borders the Indian Ocean, while to the north lies Kenya, to the northeast Uganda, Rwanda, and Burundi, to the west Zaire, to the southwest Zambia, and, finally, to the south, Malawi and Mozambique. The former capital of Tanzania, Dar es Salaam, is situated slightly to the north of the central point along the coastline of the Indian Ocean. The new capital, Dodoma, is located slightly to the north of the center of the country.

In 1975, the total population of Tanzania stood at 15.9 million. Since then, the population has grown exponentially, reaching a total of 35.3 million in July 2000. Joe Lugalla, author of Crisis, Urbanization, and Urban Poverty in Tanzania: A Study of Urban Poverty and Survival Politics, attributes the rapid population growth to increased life expectancy, a high birth rate accompanied by a declining rate in infant mortality, better health care, the availability of clean water, and better nutrition. With a birth rate of 40.17 births per 1,000 people and a death rate of 12.88 deaths per 1,000 people, the current population growth rate, estimated at 2.3 percent (1997), is still quite significant. Indeed, by 2015, the population will reach approximately 47.2 million. In order to contain this growth, the Tanzanian government adopted an official population policy in 1992. The policy, which came into effect in 1995, emphasizes measures designed to increase the general standard of living of the population. It is argued that one of the major causes of population growth is poverty, as families are obliged to have large families in order to increase familial income. The age structure of Tanzania is relatively young, with 45 percent of the population aged between 0 and 14 years, 52 percent aged between 15 and 64 years, and only 3 percent aged 65 years and over. More than 80 percent of the population of Tanzania resides in rural areas.

In terms of ethnicity, 99 percent of the population of mainland Tanzania is of native African descent—95 percent of which belong to one of the more than 130 tribes that form part of the Bantu group of people. The remaining 1 percent consists of those of Asian, European, and Arab descent. The population of Zanzibar is slightly more diverse, with a higher percentage of Arab and mixed

Arab and native African people. Conversely, religion in Zanzibar is more homogeneous (less diverse), with 99 percent of the population adhering to Islam. On the mainland, 45 percent of the population is Christian, 35 percent Muslim, and 20 percent categorized as adherents to indigenous religious systems (ones that are unique to the region). The official languages of the country are English and Kiswahili, the latter being a Bantu-based language with strong Arabic influences. The first language of most people, however, is usually one of the numerous local Bantu languages that are commonly spoken. English is quite prevalent in the business community, and Arabic is widely spoken in Zanzibar. Kiswahili, incidentally, has become the common language of central and eastern Africa.

One of the most daunting problems that the population of Tanzania confronts is the high incidence of HIV/AIDS. According to data released by the European Union on 2 December 2000—World AIDS Day—it is estimated that 1.3 million people in Tanzania have AIDS. This figure does not include the number of people that are afflicted with HIV, the condition that almost inevitably causes the fatal AIDS disease. That same day, President Mkapa announced the formation of the Tanzanian National AIDS Commission (TanAIDS), which will seek to implement the country's national strategy to respond to the HIV/AIDS epidemic. Of course, as in many African countries, the success of an AIDS policy, however well concocted, will depend on the ability of the government to address the structural conditions that facilitate the spread of HIV/AIDS, such as poverty and inequality.

According to the U.S. Department of State, Tanzania's industrial, or manufacturing sector, is one of the smallest in Africa. The main industrial activities include producing raw materials, import substitutes , and processed agricultural products. Specific areas of activity include production of cement, soft drinks, corrugated iron sheeting, food processing, chemicals, leather products, and textiles.

Once again, manufacturing activities seem to oscillate in their respective output capacities. In 1991, for example, 85.2 million square meters of textiles were produced, whereas 5 years later, in 1995, the output had deteriorated to 33.4 million square meters. The production of iron sheets similarly suffered decline. In 1993, for instance, 25,800 tons of iron sheets were produced, while in 1996, the figure dropped to 6,400 tons. Production of cement is one area of industrial activity that has escaped this negative pattern. Notwithstanding a huge increase in output in 1991, production has increased at a steady pace, growing from 589,100 tons in 1989, to 725,800 tons in 1996.

One of the major factors contributing to industrial instability relates to persistent power shortages caused by low rainfall. Since Tanzania is almost entirely dependent upon hydroelectricity, low rainfall translates into low water levels in hydroelectric dams. In November 2000, the Ministry of Energy and Minerals was obliged to announce the temporary introduction of power rationing, intended to reduce electricity consumption by about 35 percent until the beginning of the next rainy season in January 2001.

Government involvement in the industrial sector, as in all spheres of economic activity, has steadily declined since the early 1990s. The Presidential Parastatal Sector Reform Commission (PSRC), an integral component of the SAPs, continues to scrutinize parastatals and push for privatization. By June 1998, 201 firms of the 398 parastatals singled out by the PSRC experienced privatization. It is argued that private firms are more efficient and competitive than parastatals, as they must depend on profit rather than guaranteed government financing in order to continue operation.

Tanzania's tourism sector, which, according to the U.S. State Department, is growing at a rate of more than 8 percent per annum (est. 1999), is one of the country's most important sources of foreign currency. Currently, most of the tourism sector investment is concentrated in the northern part of the country in the so-called Northern Safari Circuit (Ngorongoro Crater, Serengeti Plains, and Lake Manyara). There, a number of internationally acclaimed hotels provide services to tourists from around the world, particularly Europeans.

Numerous government initiatives have sought to increase investment in the Southern Circuit (Selous Game Reserve, Mikumi and Ruaha National Parks) as well. Though service facilities and infrastructure in this area are poor, the area's diverse wildlife renders it an ideal location for further tourist development. The international donor community has helped finance the rehabilitation of infrastructure in the Southern Circuit, thereby complementing efforts put forward by the Tanzanian government. The government, for its part, recently established the Tanzanian Tourism Board (TTB) to oversee tourist development in the country, though it has renounced its previous policy orientation of controlling the tourist market.

Legislation passed in August 1991 led to a fundamental restructuring of the banking system in Tanzania. Prior to the legislation, the government exercised a complete monopoly over the banking sector. Under the old system, the Bank of Tanzania acted as the central bank, while the government-run National Bank of Commerce (NBC) accounted for over 75 percent of the country's financial transactions. Although the Bank of Tanzania has retained its functions, which include the administration of the exchange control, the NBC has been subdivided with the creation of a separate National Micro-finance Bank (NMB). Both the NBC and the NMB are in the process of being privatized.

Since the banking legislation was passed, several private banks have registered with the Bank of Tanzania. In addition to some domestic financial institutions, numerous foreign banks have established operations, including Citibank of New York, Stanbic Bank of South Africa, Standard Charter Bank of Great Britain, EuroAfrican Bank, Akiba Commercial Bank, and Exim Bank.

Tanzania has no territories or colonies.

this was really helpful information for my report on tanzania for class!!!Thankz