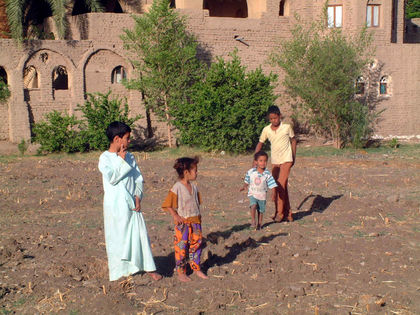 Living standards in Egypt are low by international standards, and have declined consistently since 1990. According to United Nations figures, some 20 to 30 percent of the population live below the poverty line. Despite widespread poverty, however, uneven development has led to the emergence of an affluent class that controls most of the country's wealth and enjoys an elevated standard of living that includes shopping at centers that feature the best imported goods. Living in such Cairo suburbs as Garden City, al-Zamalek, and Nasr New City, the wealthy send their children to private schools and to universities abroad. Yet not far from these affluent neighborhoods, a significant number of poor Egyptians live in squalor, with poor and overcrowded housing, limited food supply, and inadequate access to clean water, good quality health care, or education. The extremes are reflected in the country's distribution of income: in 1996, the wealthiest 20 percent of Egyptians controlled 39 percent of the country's wealth, while the poorest 20 percent controlled only 9.8 percent of wealth.

Uneven development in Egypt has not only affected the urban population. Inequality in the distribution of wealth is dictated by geographical regions. Historically, the north of Egypt has been more prosperous and received more government attention than the predominantly rural south, which stretches from Beni Suef, 120 kilometers (75 miles) south of Cairo to the border with Sudan. The central government, which retains great power over the country, has always been based in the north, and has

therefore based major economic activity in that area. According to the EIU Country Profile for 2000-01, almost one-half of economic and social establishments in the country are based in the northern cities of Cairo and Alexandria. This uneven development has fueled a cycle of rural-urban migration from south to north that has only started to abate since the mid-1990s. Migration has only served to aggravate the state of underdevelopment prevailing in the south.

The economic reforms launched by the Egyptian government in the early 1990s have been double-edged, severely affecting the lower classes and threatening to further erode popular support for the government. Both the rural and urban poor have suffered from the long decline in the quality of social services provided to Egyptians. A lack of adequate resources for schools and hospitals has meant that these services have declined in quality over the years. Despite this deterioration, 93 percent of primary level students are enrolled in schools, and a government-funded health-care system ensures that all Egyptians have access to some form of health care.

As a result of high inflation, which, at its peak, reached 28.5 percent in 1989, the middle and lower classes have seen their living standards erode since the 1980s. The problem has been compounded by the government's reduction of subsidies on basic foodstuffs and certain budget controls on public services since 1991. The government's awareness of the political implications of the complete lifting of subsidies has slowed down the implementation of IMF-mandated price deregulation. In 1991, to soften the impact of these measures on the poor and those affected by privatization, the government established the Social Fund for Development, a US$613 million project funded by the European Union, the World Bank, and the United Nations Development Program (UNDP). The fund is a job creation project aimed at training and finding jobs for workers displaced as a result of privatization. However, poverty remains endemic in Egypt despite these efforts.

In Egypt the top 40% of the population own 60.4% of the wealth, while the bottom 60% control
39.6 %. In the US, the top 40% control 70.6% of the wealth, while the bottom 60% control 29.4%. This is an even greater disparity, and current Republican budget proposals would widen the gap further. At a certain point, such blatant disparities can only be enforced by a Mubarak-like strongman. Is this in our future?
3
Shahenda

this is a load of garbage for this website spot. it doesnt have any info about the wealth.
5
Lauren

This is a well written article. I do think that it needs to have some information on how much the Egyptian government spends on education. Who is the author of this article? I am using this for a paper and need to cite it.
6
Lexus Massey

How much poverty is found at a yearly estimate? How manny people die out of average per day? Are there any laws about poverty in egypt? I need answers asap there is no time to waste they need our help now.
7
mohamed

the author is George M. Beshay. we can not estimate the amount of poverty because we cananot even estimate Egypt's true population.
8
Bigoblack11

This is a good article. All I need to know is when this article was made. I'm in need of information about Standard of Living for Modern Egypt.
9
Villain84

This article is going to be a great source for me on this paper I have for college :)
10
Abdelrahman Mohammed Lamloum