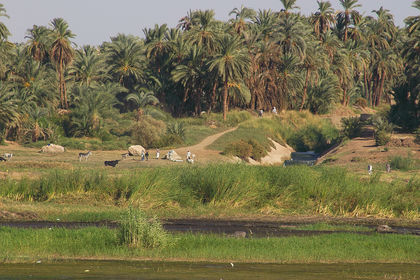 Even though its contribution to GDP has declined considerably in the last 15 years, from 25.6 percent in 1985-86 to 17 percent in 1999, agriculture remains a significant contributor to Egypt's economy, accounting for 20 percent of commodity exports. In 1998, according to the CIA World Factbook for 2000, 40 percent of the labor force was employed in the agriculture sector.

Cotton has been the country's largest agricultural export product for many years. The proportion of land cultivated with cotton has dropped significantly over the last 4 decades, from 924,000 hectares in 1962 to 227,000 hectares in 2000-01. For most of the century, cotton has been heavily subsidized by the government. These subsidies, however, were lifted in the mid-1990s and, as a result of higher cultivation costs, cotton exports have dropped from 121,500 metric tons in 1993-94 to only 45,000 metric tons in 1996-97.

In an attempt to reverse this trend, the government moved to raise the purchase price of cotton above international market levels. This was coupled with a move to import lower-grade cotton in March 1996 to allow for the export of better-quality cotton, and the full liberalization of the cotton trade in 1998-99. Higher price incentives have led to increased production and higher export deliveries, but the cotton trade is threatened by dwindling acreage.

Wheat and rice outputs have grown dramatically since the early 1990s, particularly since 1994 when all subsidies for fertilizers, seeds, and pesticides were lifted. The result has been self-sufficiency in several important commodities. Today, 95 percent of the wheat and rice crops are used to satisfy domestic consumption but, despite increased output, Egypt continues to be a large importer of food, especially agricultural products. Imports of wheat rose by 8 percent in 1996-97 and have generally accounted for more than a quarter of total imports.

Egypt's agricultural sector remains one of the most productive in the world, despite the small area of arable land and irregular and insufficient water supplies. Farmers do not have to pay for water used in irrigation. Since the construction of the Aswan Dam on the Nile river, the sector's development has been hindered by the problems of waterlogged soil and soil with a high salt content. Drainage efforts have proved insufficient to counter the harmful effects of these 2 factors to the sector's performance. Since the mid-1980s, the government has attempted to reclaim the desert for cultivation, and has managed to successfully reclaim some 1 million acres of desert. Plans are underway to reclaim an additional 3.5 million acres by the year 2017 with the South Valley Development project near Lake Nasser. These efforts, however, are countered by the fast pace of urban and industrial expansion, which has been claiming an average of 31,000 acres a year.

africa needs help and its up to us to give it to them. they are our family its not right to see them strugle
2
Jimmy

I notice that Egypts resources have declined, while its population has risen, and on top of that it has had terrible leadership. I also notice that cotton, a water and energy intensive crop to produce, is the main agricultural product.

Wouldnt Industrial hemp reduce the water and energy burden that cotton brings, and provide food and fuel from the same harvest?
3
mary mcgregor

I thought this article might help you with your project.

Egypt's population is exploding and because of that agricultural land is being lost due to urbanization. And yes Egypt is a brutal place to live.
6
Joey

And now the construction of the Renaissance Dam in Ethiopia is going to put an even greater strain on the Egyptian economy.
7
Jack

the Egyptian population is rapidly growing however the great new leaders and the fast infrastructure development does not make Egypt a "brutal" place to live.. its very safe, very lively and very fun. there's all sorts of commercial strips and any type of activity, food, education and vacation u could think of. I am not even Egyptian however I love this country and its people