As Tonga entered the 21st century, its political stability was threatened by a number of growing problems. These include an increasing national debt; overpopulation; limited land resources; high under-and unemployment; decreasing productivity in the primary sector; and a heightened awareness by the majority of citizens of Tonga's sociopolitical and economic imbalances.

Cognizant that Tonga must come to grips with its socioeconomic problems in order to maintain an independent state, Tupou IV's reign has been marked by concerted efforts to meet these challenges and to modernize Tongan society. Tupou IV has encouraged the diversification of the economic base, the development of basic infrastructures, and the strengthening of Tonga's position regionally. Over the last 20 years, a Development Bank has been established, and several loan schemes for new entrepreneurs have been initiated. Foreigners, with their capital and business acumen, are now encouraged to settle in Tonga as never before in its history.

Although the king is also aware that additional political reforms must be introduced for the monarchy to survive, Tongan monarchs historically have been reluctant to tamper with the foundations of the political structure. This is because they fear that once such reforms are underway, there may be no end to them until they eventually overwhelm and terminate the monarchical structure. The political changes most recently introduced have only been piecemeal, delaying actions that effectively keep ultimate power (especially on matters concerning land allocation) in the hands of the traditional elite.

Fortunately for members of the monarchy, the demand for far-reaching structural changes in the political system has not 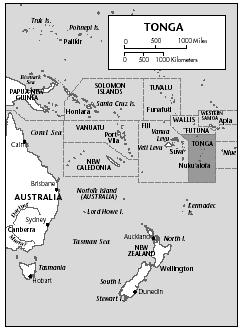 yet arisen. This is in large part due to a combination of factors including emigration, remittances, and a genuine affection for and strong national pride in Tonga's monarchy. But Tupou IV, perhaps more than any of his ancestors, may find himself forced to initiate reform precisely because of his own liberalism in allowing other influential changes to filter into the Kingdom. Such reforms could include the creation of political parties, an increase in political influence in Parliament, the readjustment of parliamentary participation, or more radically, the abolition of the formal legal elements of the noble system. Commoners are already demanding increased opportunities for political participation.

Although Tonga is going through a period of upheaval and change, Tongans are very protective of their political independence and their monarch, and with good reason, having witnessed the plight of other Pacific Islanders in the wake of foreign encroachment. The majority of Tongan citizens still appear to have an abiding affection for their monarch, although a growing ambivalence surrounds Tonga's nobles, who often serve as convenient scapegoats for Tupou IV. Like his great-grandfather, this king appears to be a master at playing both sides of the fence: appeasing the nobles while simultaneously attending to the needs of the commoners. He is a religious man who does not, for instance, have an opulent lifestyle. He does not rule by force but by reason and suggestion, and is apparently willing to change his position on specific matters if public support is not forthcoming. This occurred recently when the public strongly contested the construction of a waste treatment plant Tupou IV supported. Eventually, plans for the plant were withdrawn.