Sweden is a constitutional monarchy with a parliamentary form of government. The gradual development of parliamentary democracy was realized in the early twentieth century with the expansion of suffrage and with elected leaders being accountable to the Parliament, simultaneously reducing the role of the monarchy. Since 1975, King Carl XVI Gustav has served as a unifying force and a symbol of national identity, performing largely ceremonial roles.

Whereas the Swedish Parliament (Riksdag) consisted of two houses between 1866 and 1970, the constitutional amendments of 1968–69 established a single chamber, popularly elected through universal suffrage. Members of the 349-member Riksdag are elected to three-year terms through an electoral system of proportional representation. The speaker of the Riksdag nominates the prime minister, usually the leader of the largest party in Parliament. This selection must be confirmed by the Riksdag with a simple majority of votes.

The Socialdemokratiska Arbetarpartiet (SAP—Social Democrat Party) is both the oldest and largest among the major parties in Sweden, having controlled government or participated in governing coalitions almost continuously since 1932. The SAP was forced into opposition from 1976 until 1982 and again from 1991 until 1994. This long period of governance has allowed them to pursue goals of economic prosperity, social security, full employment, and equality. The SAP is closely tied to the Swedish labor movement, which organizes more than 80% of employees. Between 1994 and 1998, it governed as a minority government with support from centrist parties. In the September 1998 election, the SAP won 131 seats (a loss of 30 from 1994). It must now rely on two untried coalition partners: the Vänsterpartiet (VP—Left Party) and the Miljöpartiet de Gröna (MP—Green Ecology Party) This bloc will have a solid majority of 190 seats, but there may be problems between the moderate leftist SAP, the radical socialist Left Party, and the countercultural Greens.

The main opposition party is the Moderata Samlingspartiet (M—Moderate Conservative Party), the second largest party, with 82 seats in the new Parliament. The center-right Kristdemokratiska Samhällspartiet (KDS—Christian Democrats) gained 27 seats and now hold 42. The other parties include the Centerpartiet (C—Center Party) and the Folkpartiet Liberalerna (FP—Liberals). Each lost nine seats and hold 18 and 17 mandates respectively. In September 2002, the Social Democrats, who have run Sweden for 61 of the past 70 years, won their third general election in a row and, for the first time since 1968, the government actually increased its share of the vote, achieving nearly 40% against 36% four years ago. For the main opposition party, the conservative Moderates, who promised big tax cuts, the 2002 election was a catastrophe. Their vote slumped from 23% last time (1998), to a bare 15%. To ensure a stable majority in 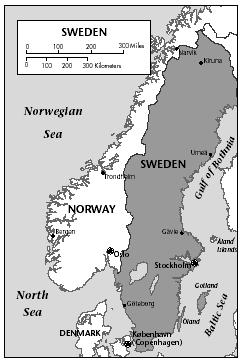 Parliament the leader of the SAP, Göran Persson, must rely on the small Green and ex-communist Left parties. Before the election, both had demanded a seat in government as a condition for their continued support. Persson refused, mainly due to differences over defense and the EU: the two small parties are keener on neutrality and suspicious of further integration into Europe.

Thank you for sharing this information! It helped a great deal for my paper about Sweden. Especially in the Political Development section of my paper. Very much appreciated!
2
Shy Ronnie

thanks for this page, helps a lot! please post more on other topics as well!